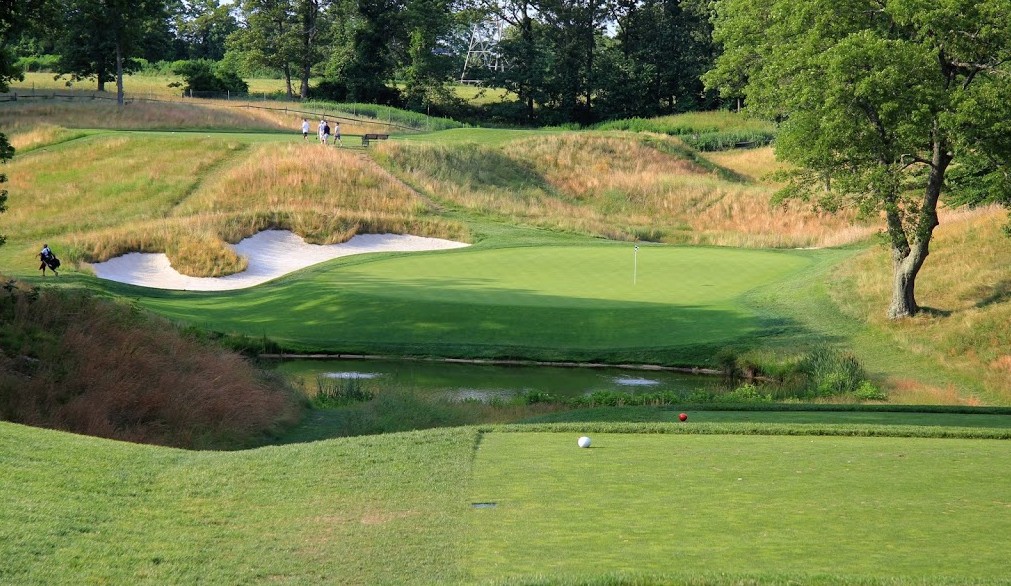 I played two rounds on back-to-back days on the Black course at Bethpage State Park. The course was built in 1936 by A.W. Tillinghast and, since its inception, it has hosted two U.S. Open Championships (2002, 2009) among a slew of other tournaments. Tillinghast built the course to compete with its fellow northeast neighbors (read Pine Valley and Winged Foot), and he certainly succeeded.

I played both windy rounds from the tips, measuring a long 7,400 yards. I can comfortably say that Bethpage Black is the hardest course I have ever played. Although the course was extremely difficult, it was enjoyable, and the design was fair. This quote from Golf Club Atlas sums it up well:
“Some modern courses lose a sense of continuity in their quest for difficulty. Such modern courses feel fragmented, as you go from one impossible hole to the next. One of the lasting appeals of Bethpage is that the holes seem to be effortlessly cut from the same fabric, with one sound hole following another.“ Two themes seen from A.W. Tillinghast throughout the round are a premium on driving and superb course bunkering. Keep an eye out for these two things in the pictures of the course. The course really begins to take off on the second hole. The tee shot, seen in the picture above, requires a right to left ball flight followed by an uphill approach to an elevated green. A 3 wood or hybrid off the tee is the play. At 389 yards, it is the shortest par 4 on the course. Anything in the rough, anywhere on the course, was dead. The third hole is the first real taste of Tillinghast’s amazing bunkering. The 230 yard par 3 has a large green that moves away and left from the player. A back left pin placement creates an unbelievably tough approach over the bunkers. The 5th hole is one of multiple on the course with a large diagonal bunker running across the fairway. The golfer can cut off as much as he wants to shorten the hole. Approaching from the right side of the fairway is optimal. The hole requires a cut off the tee and a draw into the elevated green. The par 5 4th hole is the course’s signature hole. The bunkering is extremely intimidating from the tee. Tillinghast is quoted as saying that the 4th hole is the best three shot par 5 in golf. The heavily bunkered green slopes away from the players, shrugging off any poorly struck approach shots. The downhill approach to the 6th is one of the most picturesque on the course. The par 5 7th is another hole with a diagonal bunker guarding one side of the fairway. Cutting off a large portion of the bunker results in a shorter second shot into the hole, but land in the bunker, and you’re looking at bogey or worse. Classic risk and reward. The downhill par 3 8th measured 210 yards and is yet another stunning hole. The slope in front of the green is alarmingly steep. Any shot short will run back into the water. The collection of gorgeous par 3s continues with the 14th hole. Distance control is key with the approach to this green. The bunker short right is over ten feet deep. The tee shot can vary by nearly 40 yards depending on the pin position on this green. The 15th hole is the number one handicap hole on the course. It is paramount to hit the fairway on this hole! A huge drive still leaves an uphill 145-165 yard approach to a heavily bunkered and sloping green. The 15th was one of my favorite holes on the course. The 17th is yet another extremely strong par 3. It requires a 205 yard shot into a very shallow green. The pin was far left during our first round and far right during our second round… I hit it into the front bunker both rounds… The 18th caps off a round that required nothing but pinpoint accuracy off the tee. The fairway narrows in the landing area and leaves a manageable 100-130 yard approach to a heavily bunkered, but large, elevated green. You let out of sigh of exhaustion and relief walking off the 18th green at Bethpage.

The course was in extremely good condition. The greens, fairways, and rough were all very lush and carpet smooth; however, most of the bunkers were unraked and I ended up fixing 4-5 pitch marks on each green. Unfortunately, that is the nature of the beast with public golf courses receiving hundreds of rounds per day. The greens crew does a spectacular job with the course. I greatly enjoyed my rounds at Bethpage Black. In addition to Pine Valley, this was one of the only rounds where I couldn’t think of a weak hole on the course. I walked off the course exhausted each day. It gave me a huge appreciation for what the pros experience during a US Open at Bethpage. I was playing a less penal course setup, but each mistake during the round was deadly to a score and any weak aspect of a golfer’s game is immediately exposed. Simply having the stamina to play four competitive rounds from the tips at a monster of a course like Bethpage is a feat in itself.