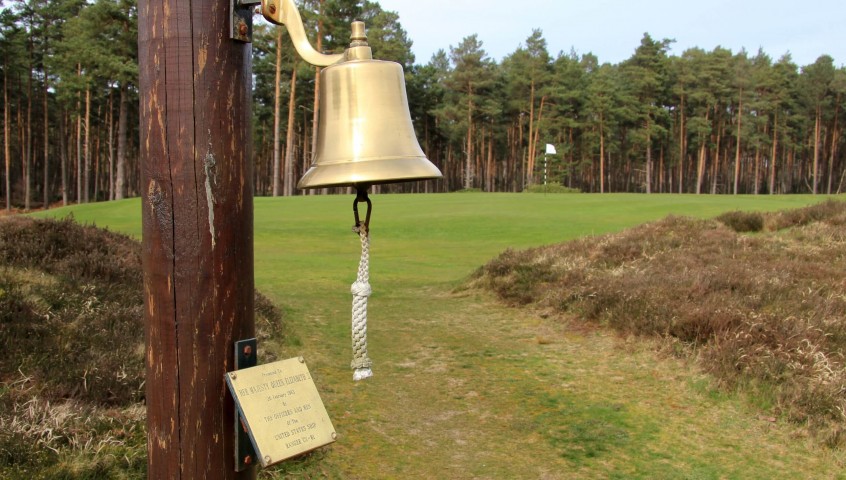 Swinley Forest is completely different from any other club that I have visited. “Extremely exclusive” and “very unusual” only begin to scratch the surface of the club. The membership is comprised largely of British aristocracy and high ranking members of the British military. The Duke of Edinburgh (the Queen’s husband) and the Duke of York (the Queen’s son) boast membership at Swinley. There is a real sense of occasion when pulling through the imposing gates onto the property. The beautiful traditional clubhouse is exactly what you would expect at a club whose course is ranked #92 in the world. 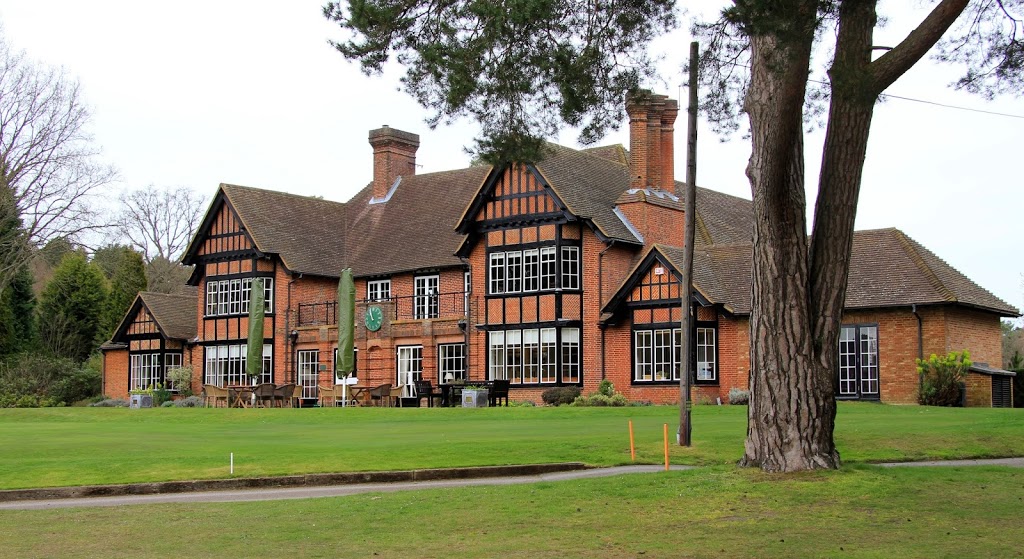 The 17th Early of Derby founded Swinley Forest Golf Club, which opened in 1910. The founding principles of the club were eccentric, and nearly all of them have endured to the present day. It has only been in the past decade that the course has been measured. The club history book explains that “every previous attempt to have the course measured was instantly vetoed as being too professional and therefore ‘not Swinley.'” Scorecards have also only been consistently printed and used in the last decade. Swinley Forest exists solely for the pleasure of its members, most of whom think the rest of us wring the enjoyment out of golf by taking it too seriously. I saw this personally as the two members in the group ahead skipped from the 11th hole to the 15th, but not before telling me, “feel free to skip ahead with us or play on. Whichever you fancy.” 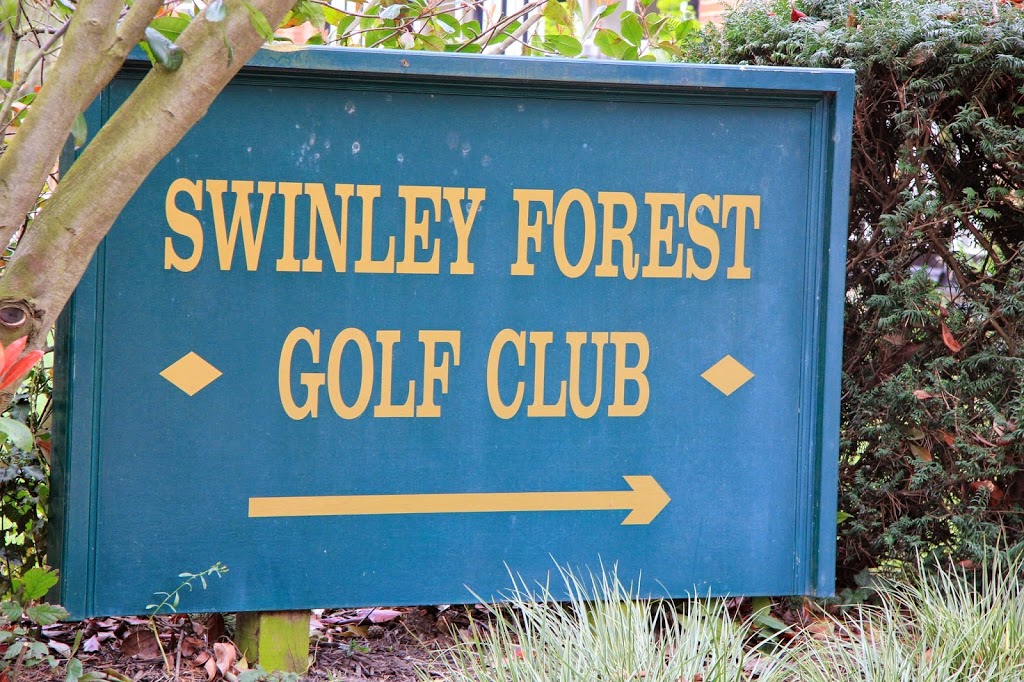 Complete serenity at Swinley Forest is created both through the beautiful setting and the fact that there are never more than a handful of members playing the course. Even then, most members are just hopping out for a few holes with their dog. The course reminded me of a heathland Augusta National in many ways, especially with an “open” feeling to the course and beautiful vistas across the property. After finishing my round, I had a shower in the locker room and proceeded to join a number of members for lunch in the clubhouse. It is important to emphasize that the exclusivity of Swinley Forest certainly does not equate to unfriendliness. I was treated very well by both members and staff alike. 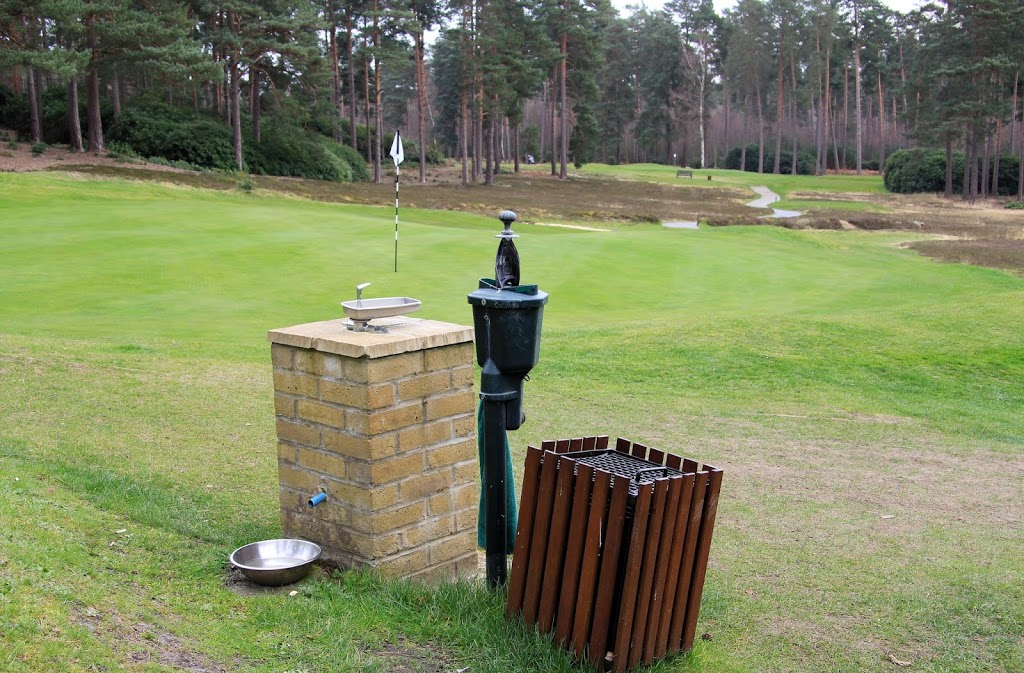 Swinley Forest does not host medals, or any serious competitions, on their course. It is also rare that they participate as a club in competitions elsewhere. A section of the history book expands on this topic. “Swinley has two comparatively recent annual fixtures, when they play Sunningdale and the Seniors. They will also sometimes turn out a side for some commemoration or pertinent tournament, such as the Colt Cup… The Club will also field a side for like-minded groups such as the Nibblock Golf Society, made up of members from Augusta National Golf Club and Pine Valley Golf Club.” Members do not have handicaps. Outside of the occasional match, those lucky enough to claim Swinley Forest as a home club simply enjoy the great course, and don’t worry about such trivial things as scores. 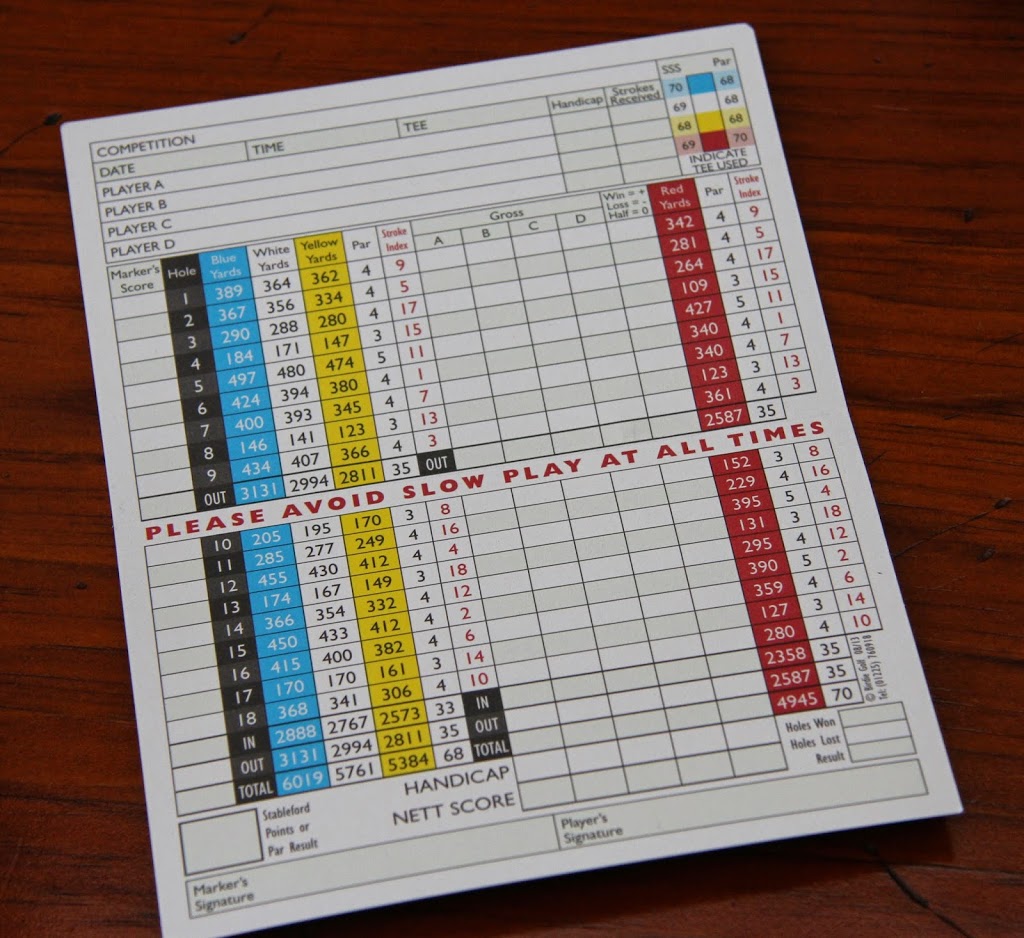 The course at Swinley Forest is an excellent example of heathland golf. The course architect, Harry Colt, described Swinley in his humble manner as “his least bad course.” This is a particularly impressive statement considering Colt’s extensive list of great designs, a number of which sit in the top 100 in the world. The overall length of Swinley Forest measures just over 6,000 yards, but with five par 3s and one par 5, the course does not feel short at all. Colt also made excellent use of the terrain, with some very challenging uphill par 4s. While much allure surrounds the club due to its exclusivity and quirky traditions, it is the course itself that takes center stage after spending a day at the club. 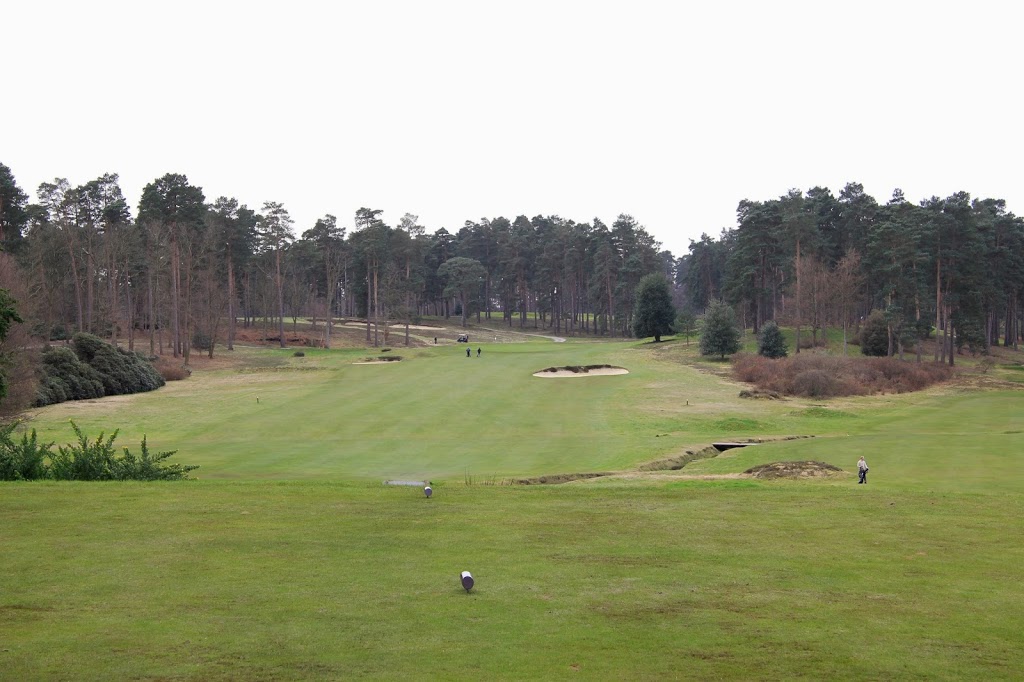 In keeping with Colt’s design philosophy, the first hole has a wide fairway and few bunkers. Colt thought that the first two holes should have open fairways, and get players onto the course in a quick manner. 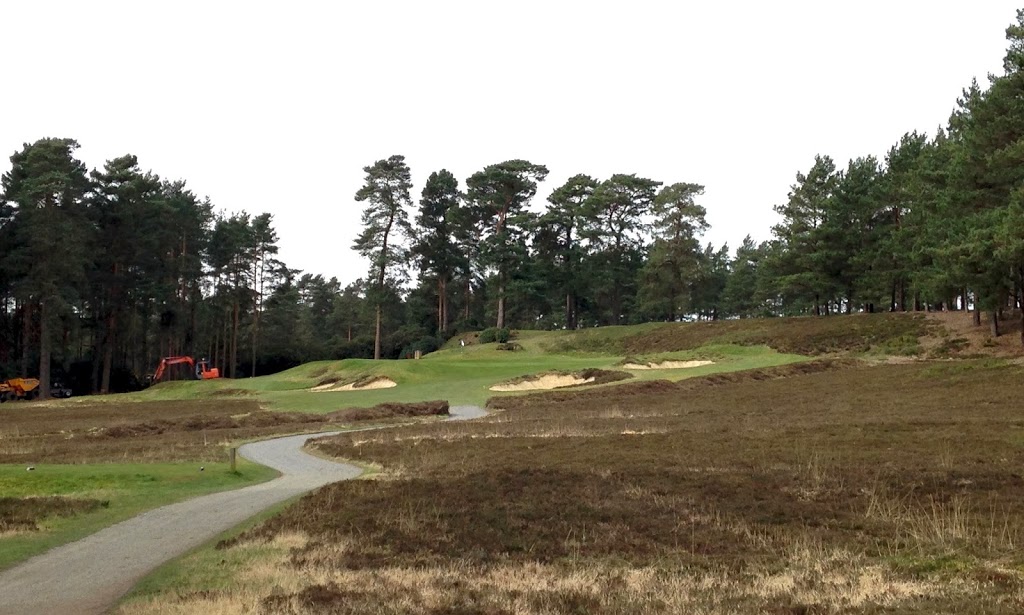 The fourth hole is one of the best par 3s that I have played while in the UK. This bold statement is backed up by a Redan green sitting on a natural shelf, which is protected by a viciously deep bunker on the front left. This hole is an example of the great use of terrain on the course. 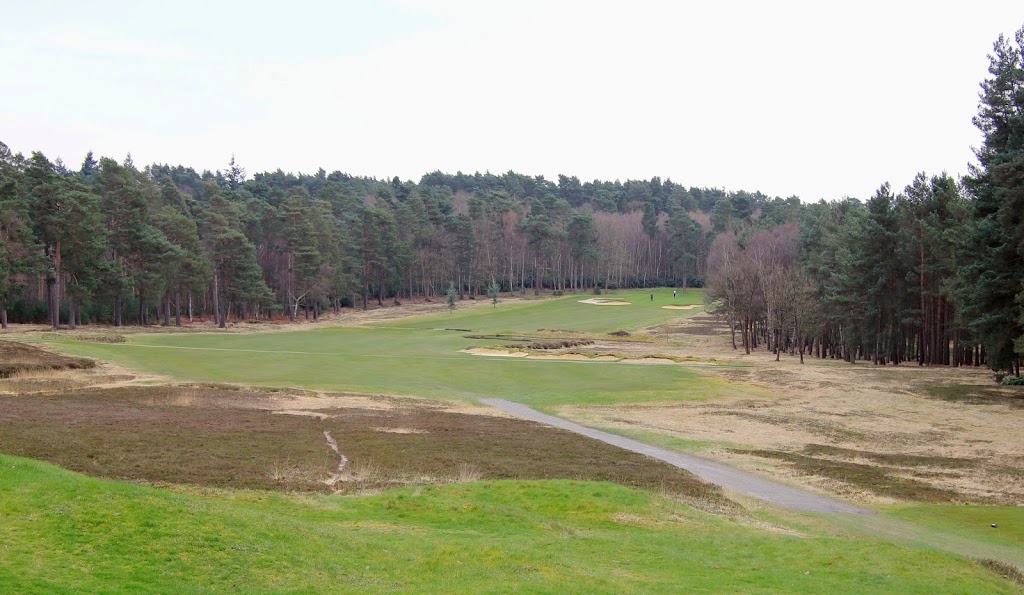 This elevated tee shot provides an excellent view of the dogleg right par 5. A bunker sits at the corner of the dogleg, and a small lake protects an area where shorter hitters would lay up. 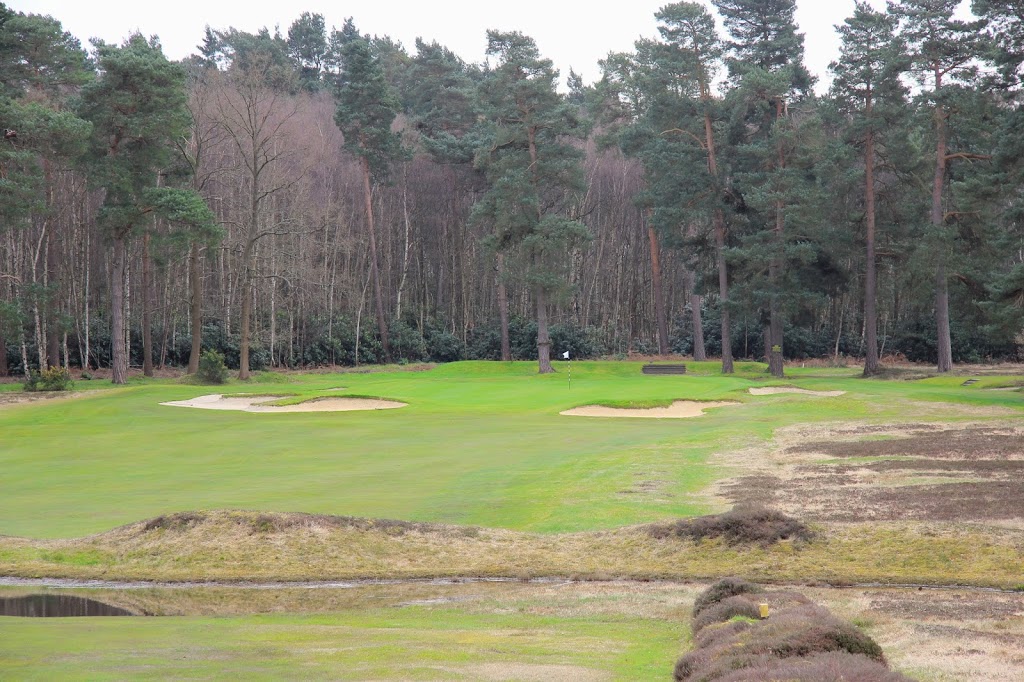 The green is guarded by a number of fairly shallow bunkers. The foliage and heather would be visually stunning during warmer times of the year. 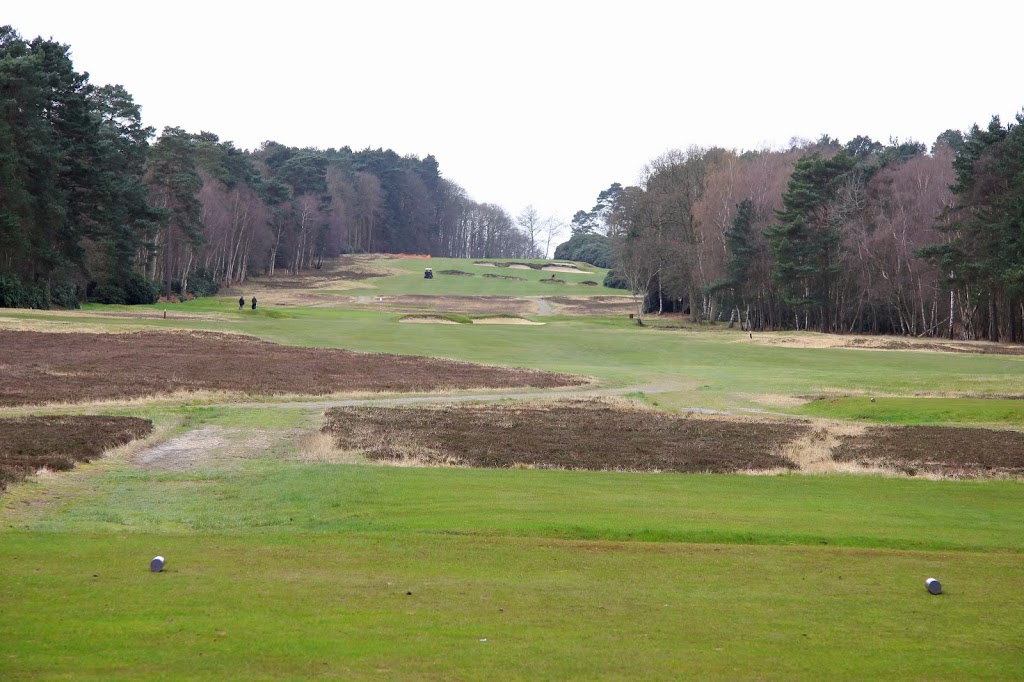 The view from this tee is grander than it appears in the above photo. The drive is fairly open, but the challenge during my round was found at the green. 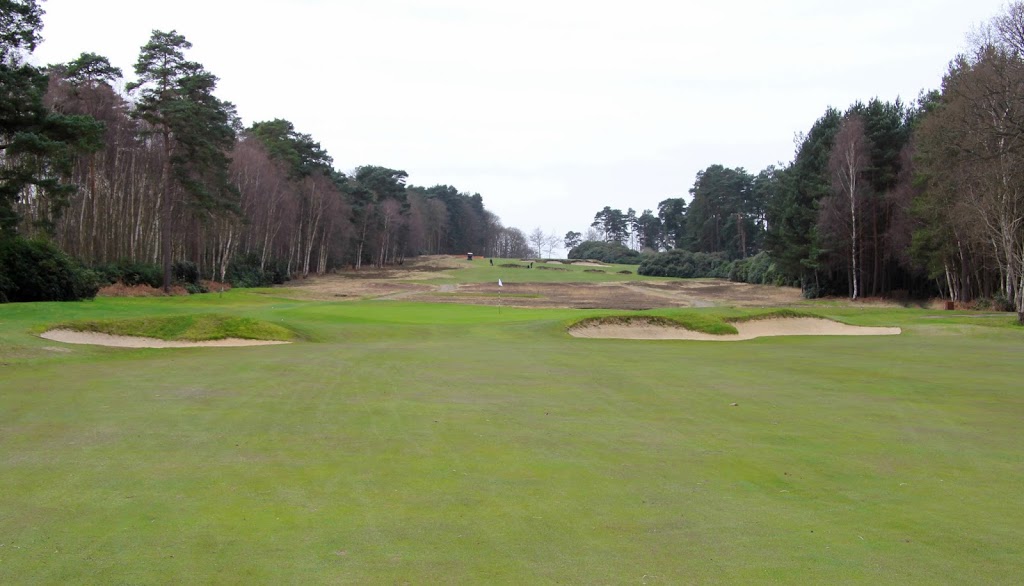 This green complex was similar to others on the course in that one of the bunkers, which appeared to be greenside, was actually thirty yards short of the green. There were a number of holes with similar optical illusions in the bunkering. 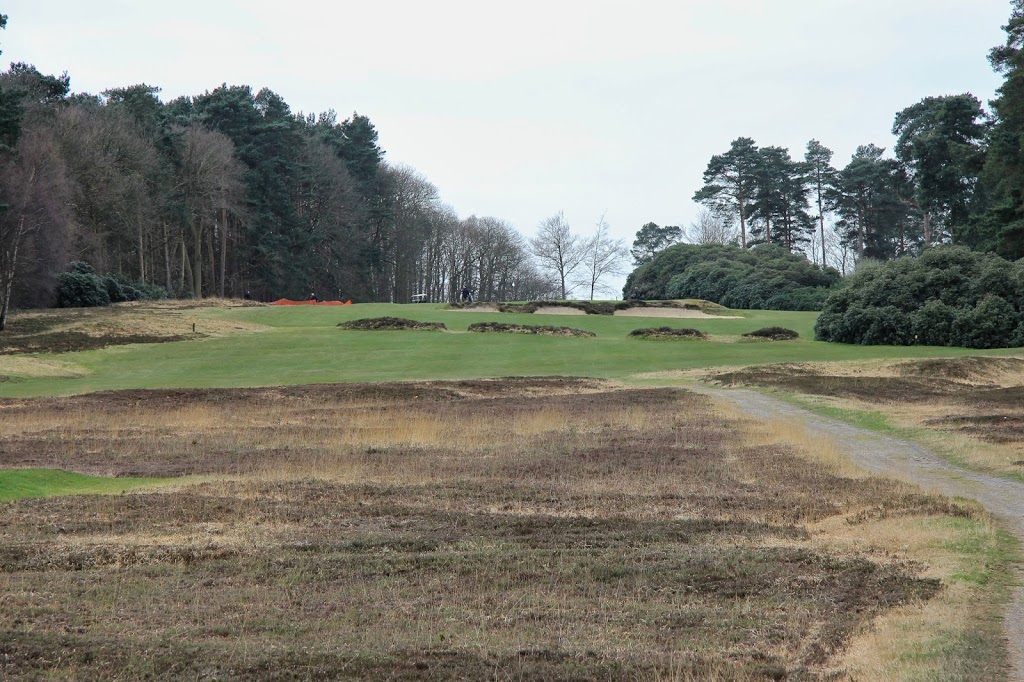 This uphill par 4 plays longer than its yardage and features a line of heather covered mounds 260 yards from the tee. The approach shot plays much longer than the yardage and the front right portion of the green is bunkered. 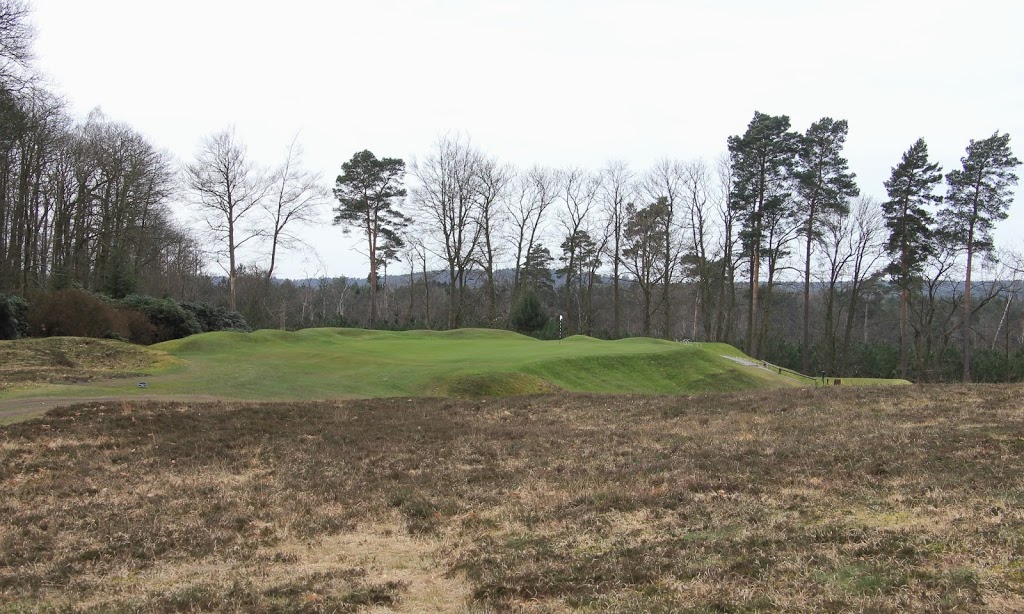 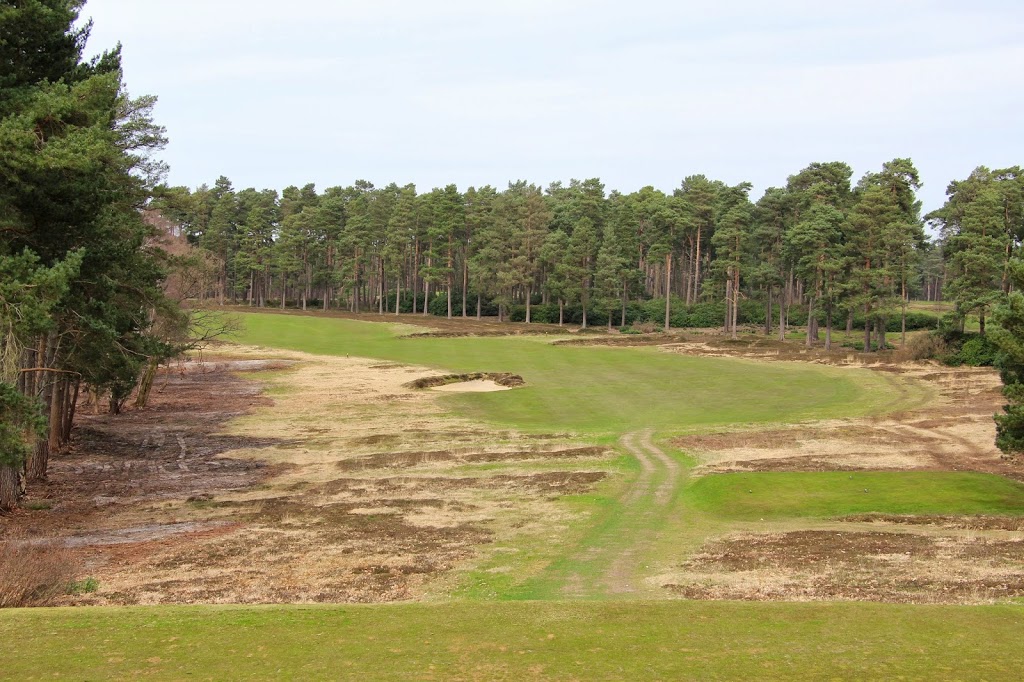 The sweeping right to left fairway presents a beautiful view from an elevated tee. Thick heather protects both sides of the fairway. 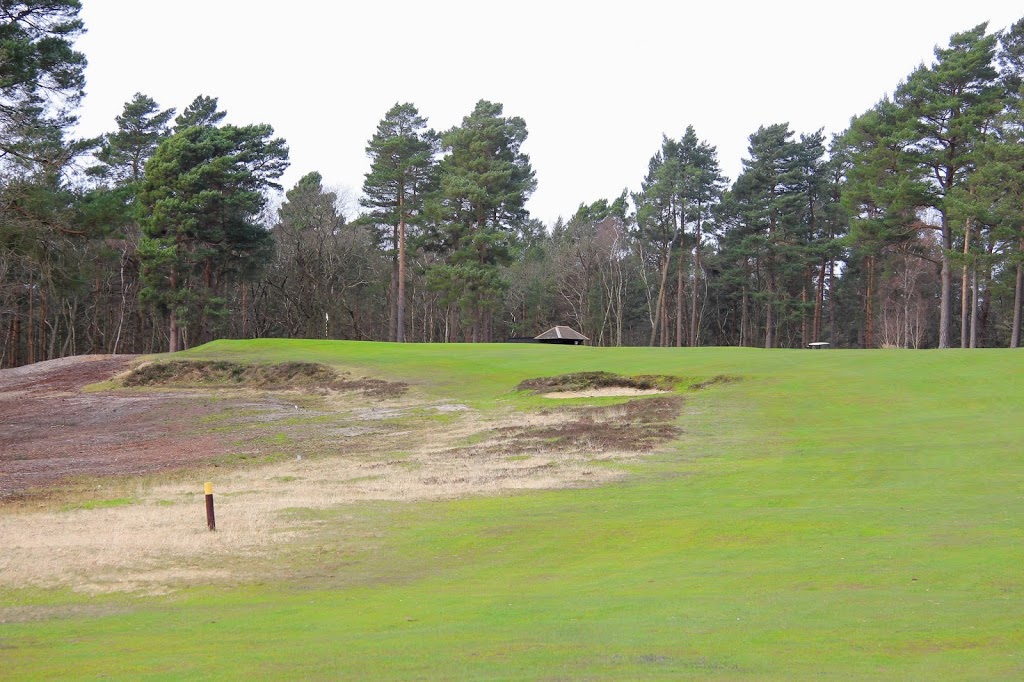 The bunker-less green was larger than it appears from the fairway, but this hole was another very challenging par 4 on the 6,000 yard course. 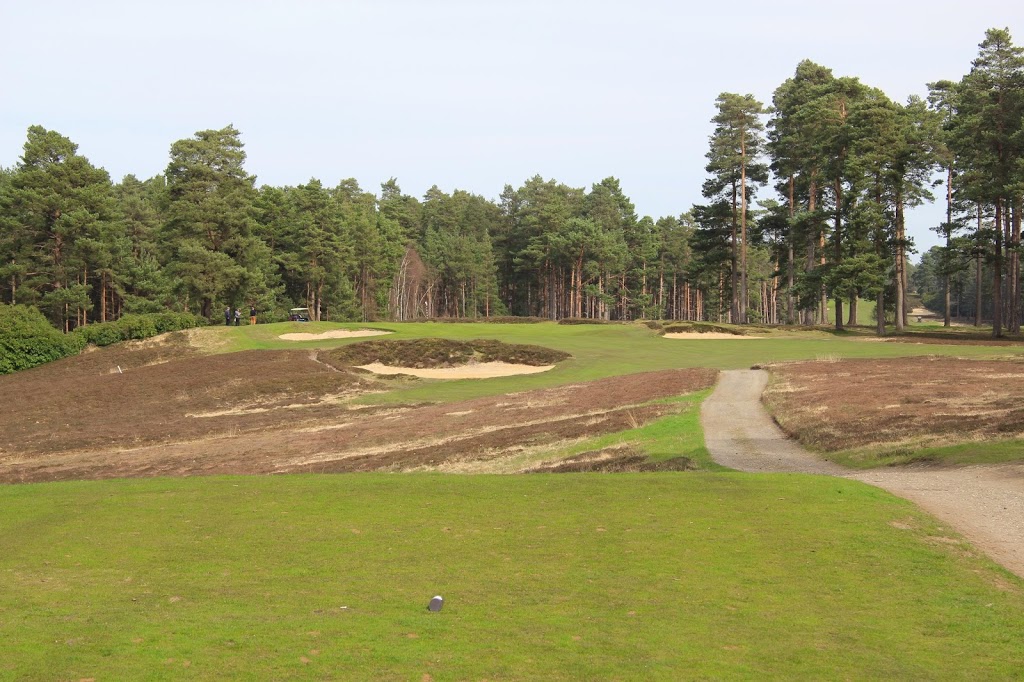 The theme of particularly strong one-shot holes should be apparent by this point. The par 3 10th is well bunkered and the sloping green is deceptively small. The entrance to the green is open, and shorter hitters are able to run the ball onto the putting surface. 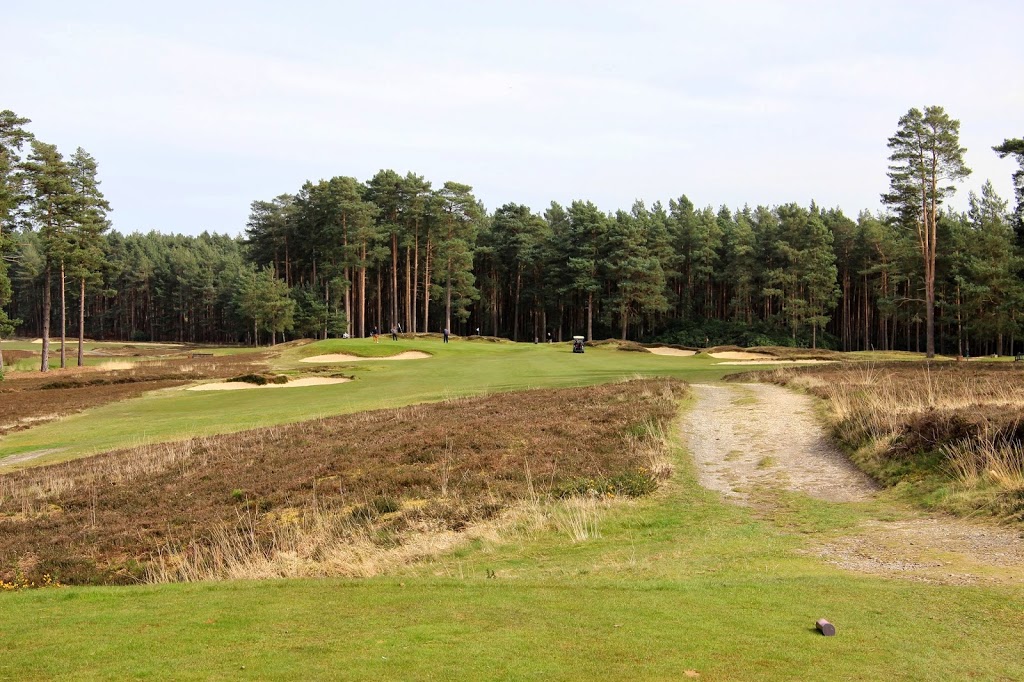 Swinley may only be 6,000 yards, but the 11th was one of only two par 4s under 360 yards. This hole was still no slouch, with heather and bunkers catching any wayward shots. 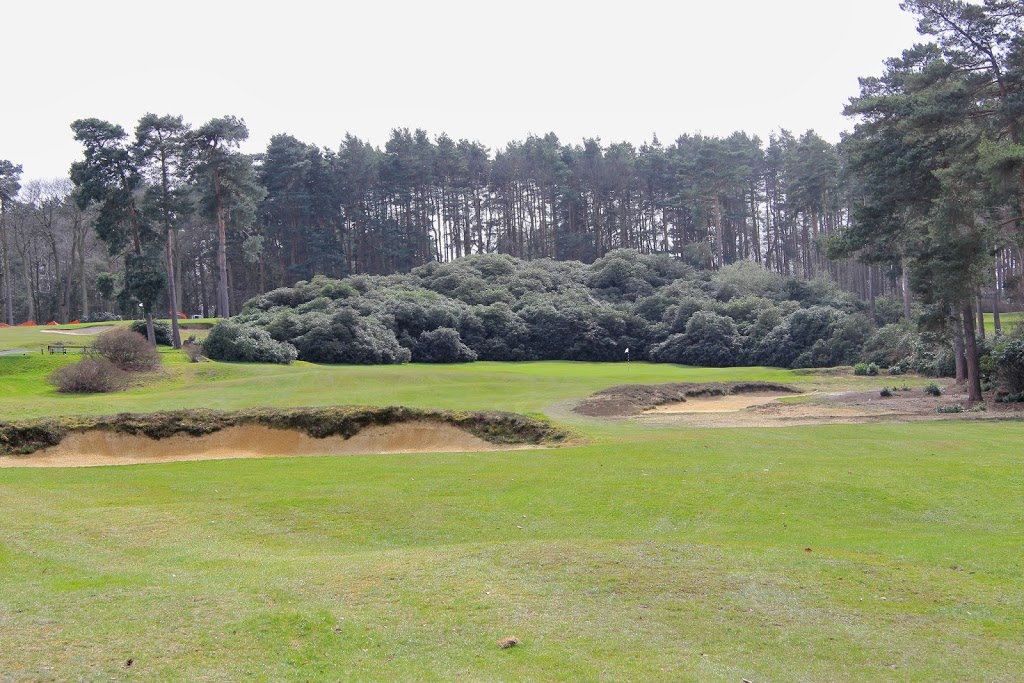 The 12th has only greenside bunker and the putting surface slopes heavily back to front. The rhododendron thicket behind the green is one of the largest that I have ever seen, and I can only imagine its beauty when in bloom. 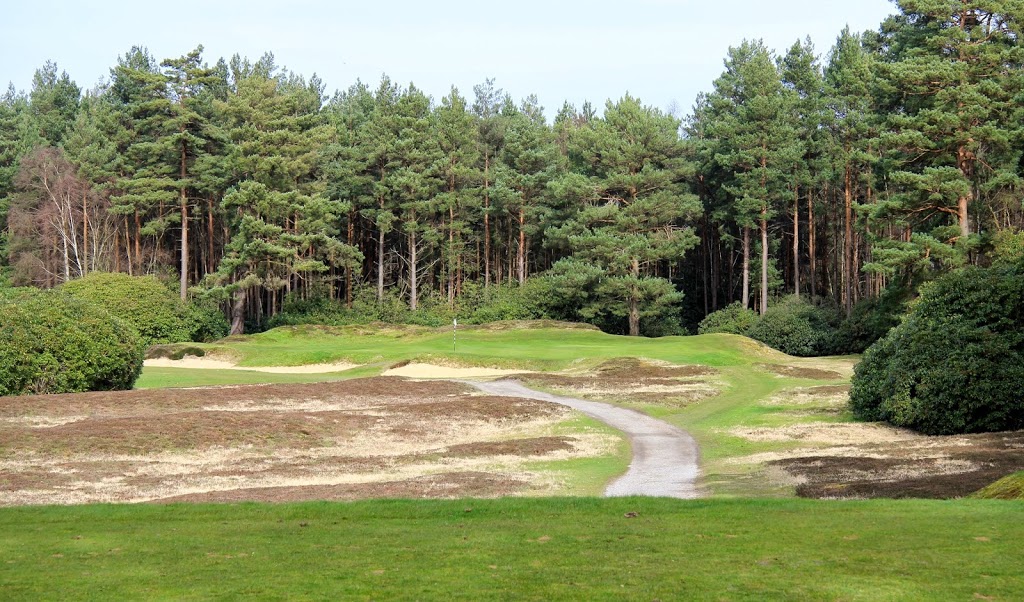 This par 3 is framed beautifully by the trees surrounding the back of the green. 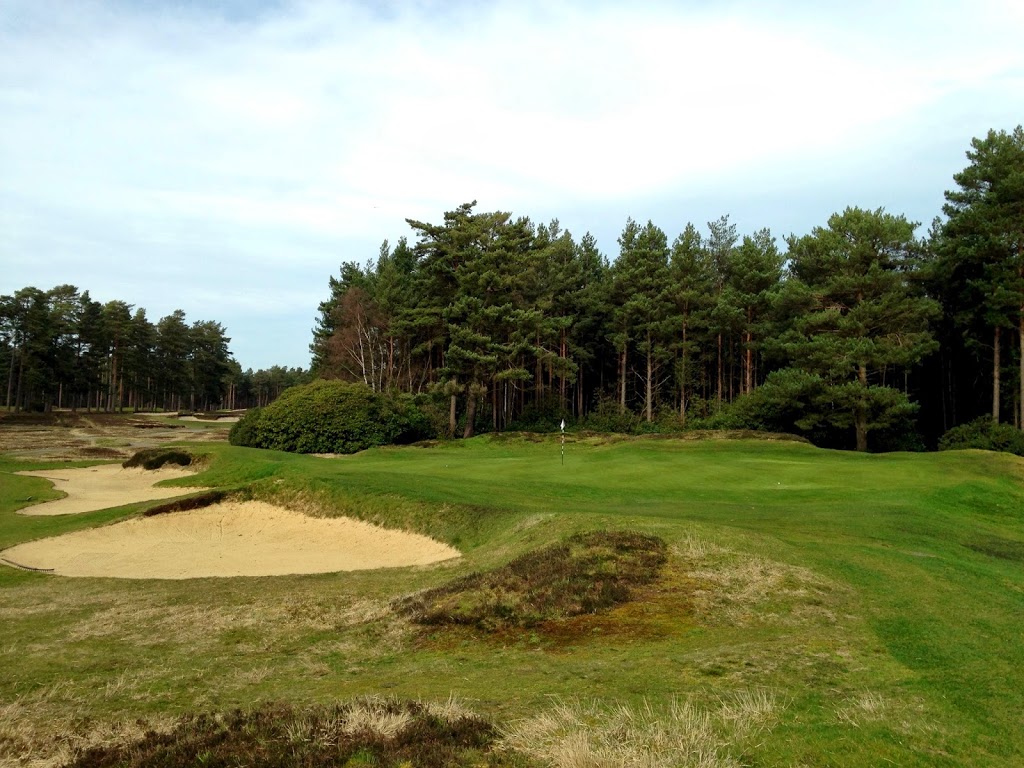 Two front bunkers guard the great green complex. It was in this nook of the course, looking back towards holes played earlier, that the beauty and openness of the property really came through. 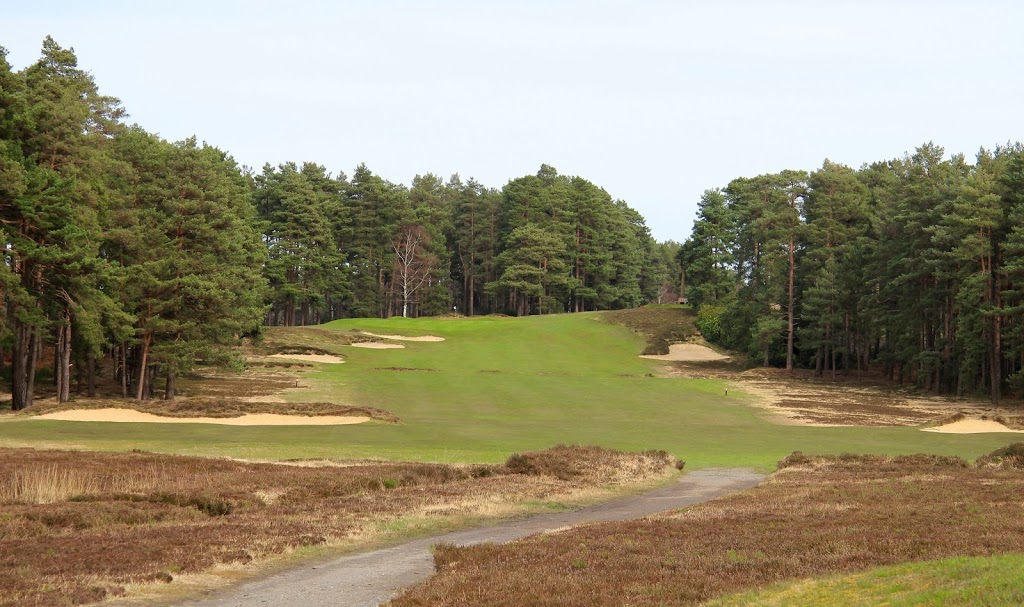 This 450 yard uphill par 4 is another challenging and long hole on the course. The fairway is appropriately wide, but bunkers and a large false front guard the green. 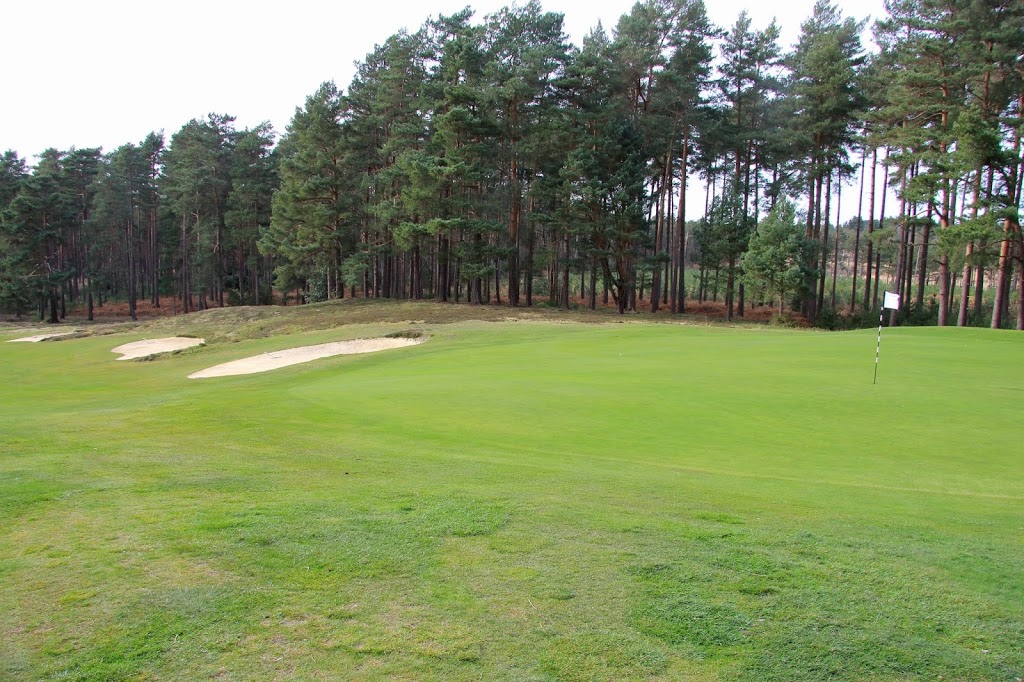 The green slopes heavily back to front and the main objective on approach shots should be reaching the back half of the sloping surface. 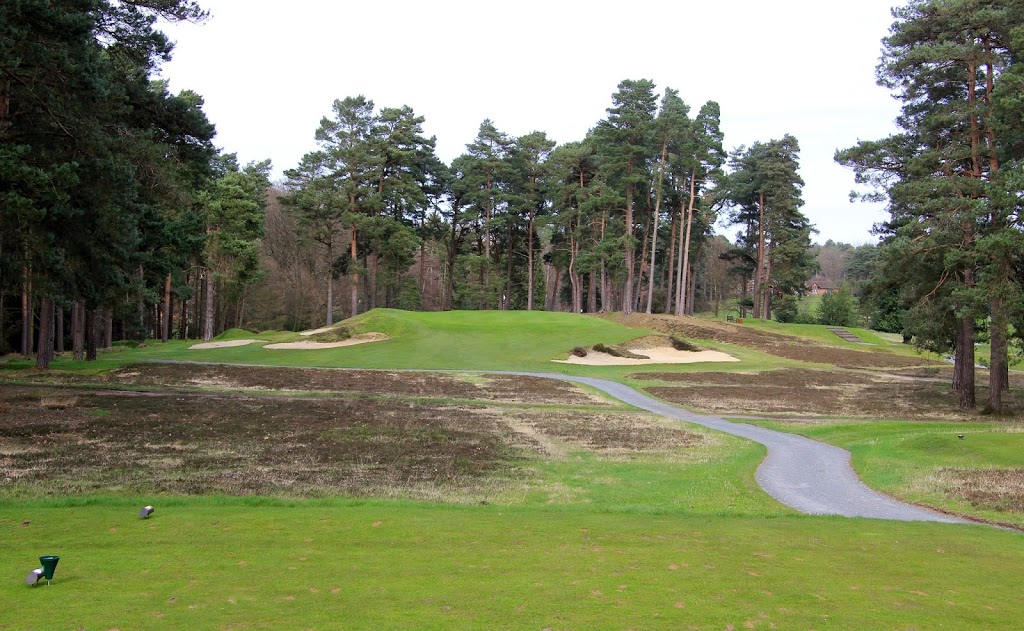 The final par 3 of the course caps off a masterclass in one shot holes. The raised green slopes off on all sides into heather and deep bunkers. An accurate iron shot is required to hit this small green. I wish I could have had a bucket of balls to practice all afternoon on this hole. 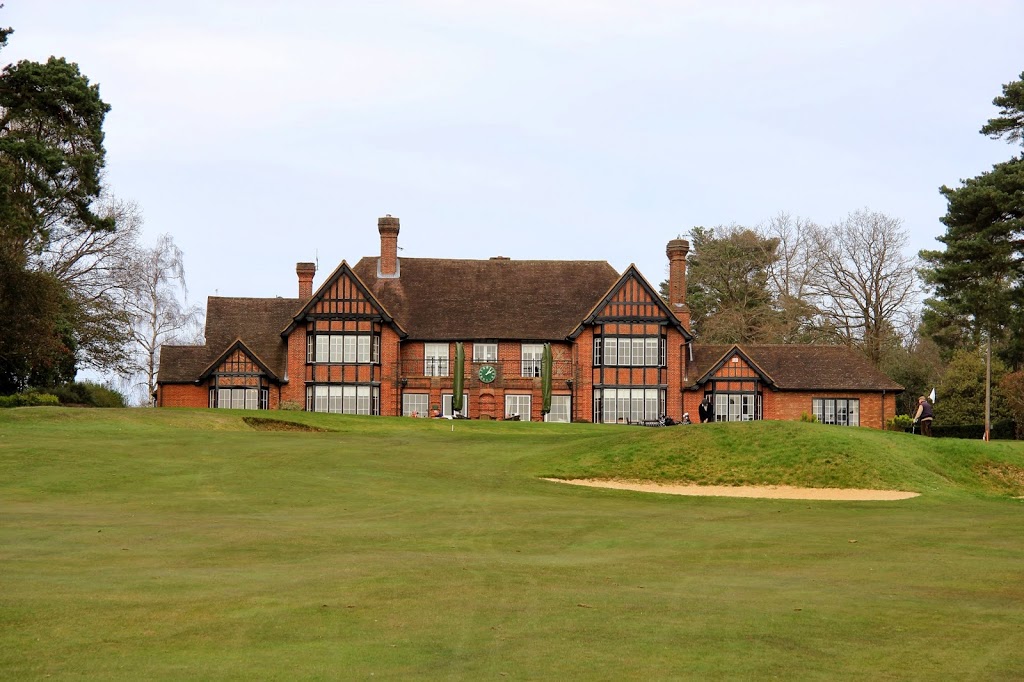 The dogleg left finishing hole features a creek running across the fairway. Mid to long hitters can carry the stream and an approach shot is left from the point at which the photo above was taken. The uphill approach is completely blind, and distance control is important as the green slopes back to front. 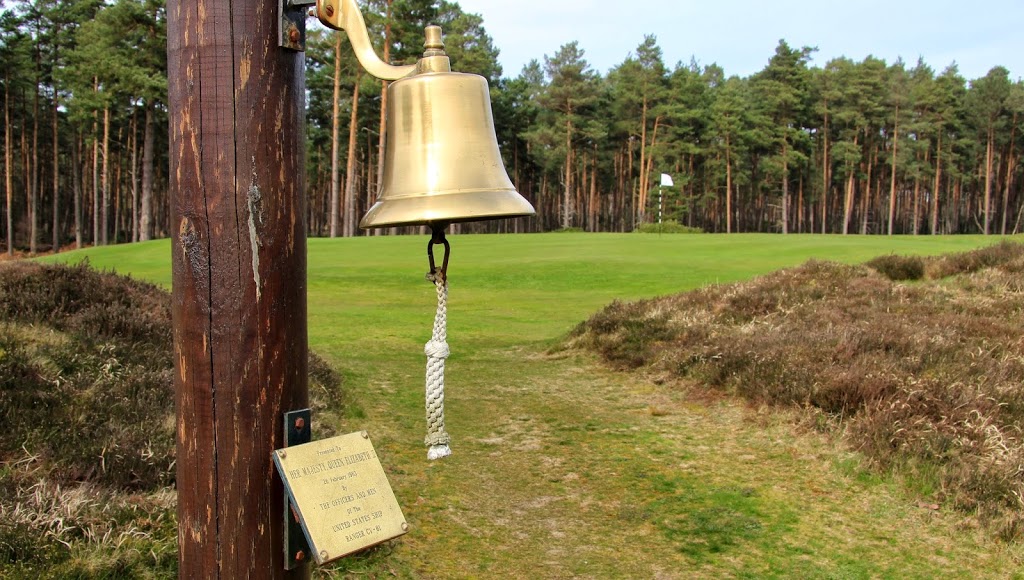 I played Swinley Forest the day after playing golf at Wentworth. The two clubs stood a long way apart in their ideologies. The corporate feel at Wentworth was replaced with understated tradition at Swinley. The best way to finish this post is with another quote from the history book that sums up the club very well. “Swinley is an anachronism, living in its Edwardian past. But it is an anachronism that works. Nearly one hundred years on, the membership is drawn from virtually the same families, with a few boasting an unbroken line from a founding member. All subscribe to the original ideas and criteria – a quiet atmosphere, with agreeable colleagues and an old-fashioned lunch.”