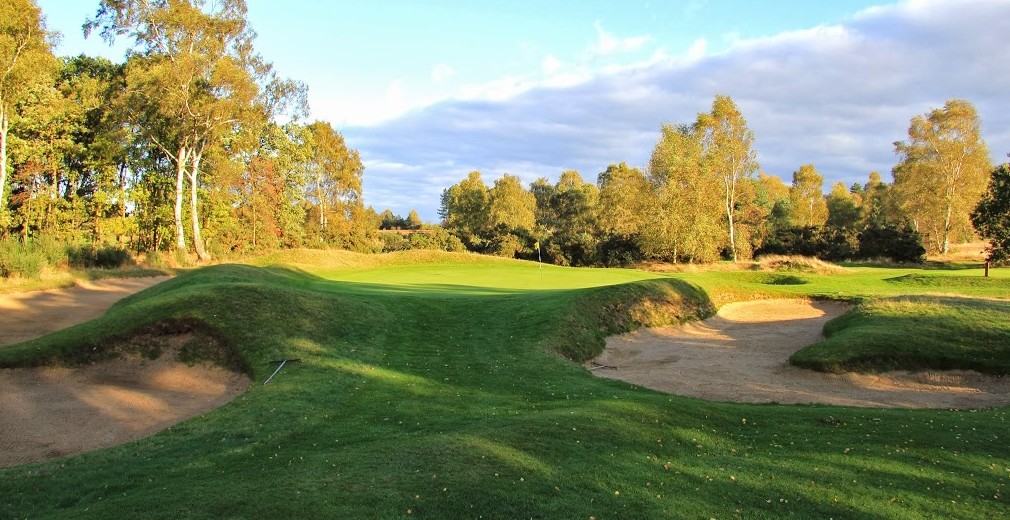 My visit to Woodhall Spa Golf Club marked my first taste of English golf. It is also my latest check mark on the world top 100 list, on which the Hotchkin course is ranked #62. It has taken me three years to make the trip south from Scotland with my golf clubs in tow. This trip included rounds at Woodhall Spa (Hotchkin) and Ganton Golf Club. In this review, and the coming post on Ganton, you will see me draw a number of comparisons between the two clubs. 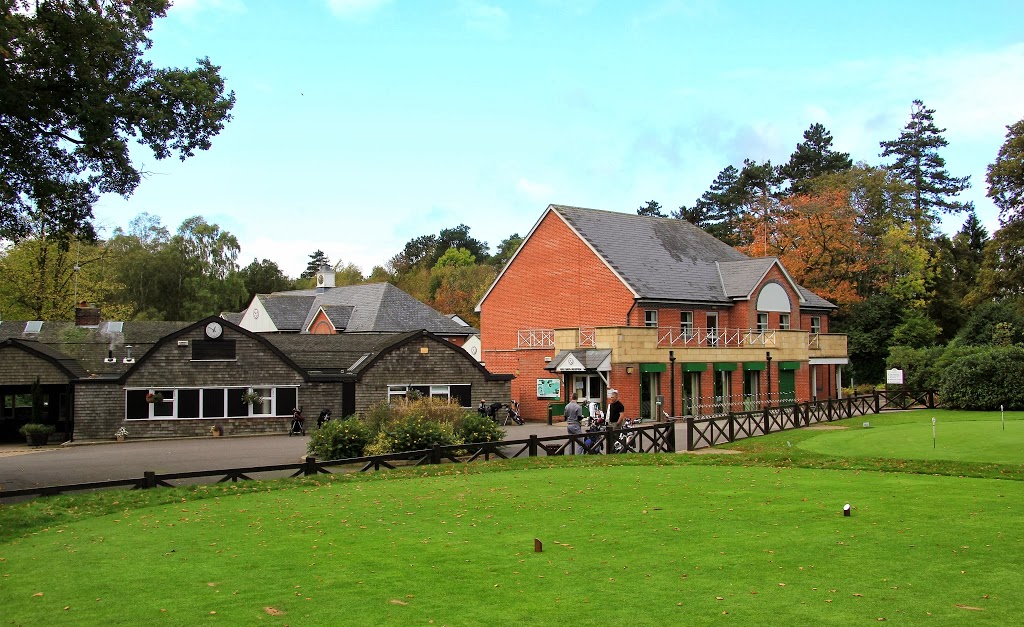 We arrived at Woodhall Spa after a long drive from Edinburgh eager to play the course. The facilities are nice, but don’t have a particular “golf club” feel. The club is “The National Golf Center” and as of 1995, is owned by the English Golf Union and the course feels as such. This is certainly not a negative observation, but if you are in search of tradition and “old English club” feel, head two hours north to Ganton. The Hotchkin course was my first taste of heathland golf. The course lived up to its legend, and I really enjoyed the round. 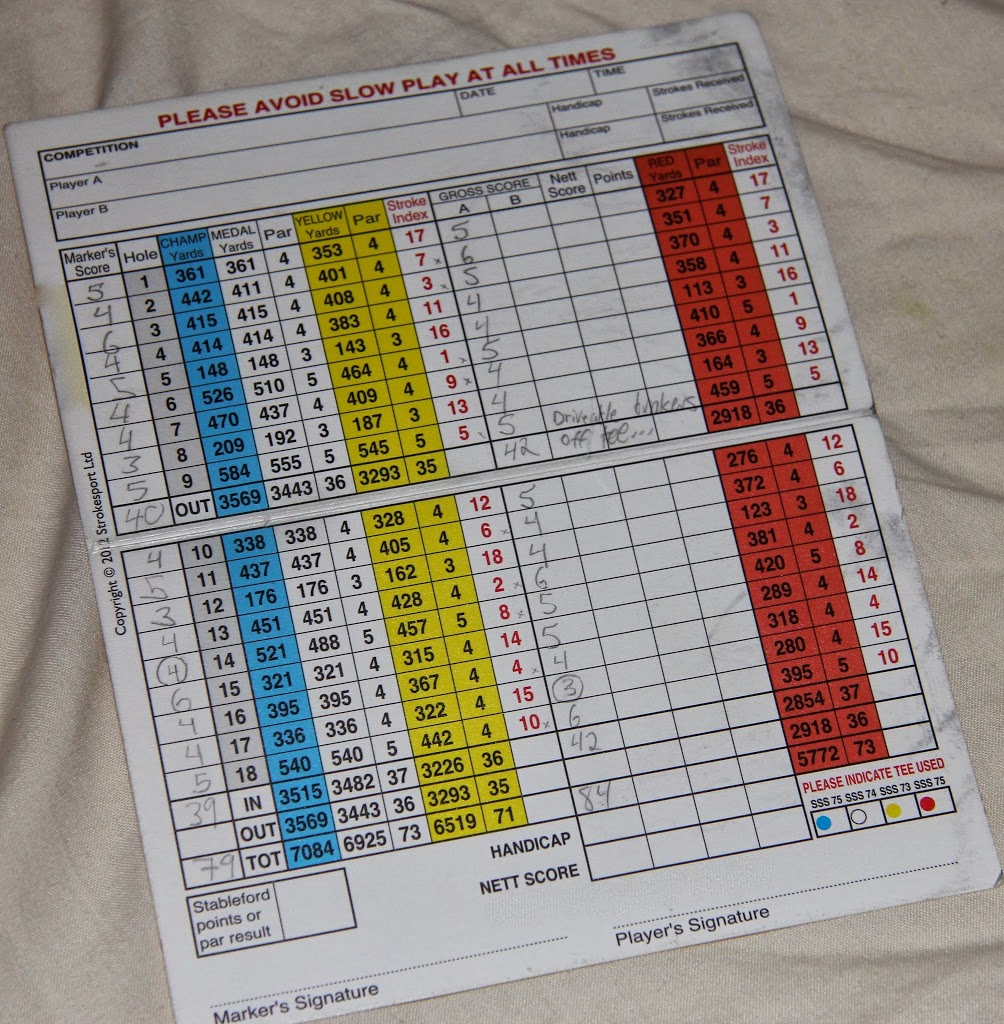 I only had two, very minimal, complaints about the course. Firstly, the greens had been aerated and were in poor shape. Of course, aeration is essential course maintenance, but our round happened over “summer peak dates” during which peak greens fees are charged. For the money, you would expect great course conditions. Secondly, the absence yardage markers in the fairway bothered me (as I struggled with distances all day). This is a standard feature of traditional old clubs, but based on my short visit to the club, old tradition does not seem to be its aim. I should have ponied up the £5 and bought a yardage book! 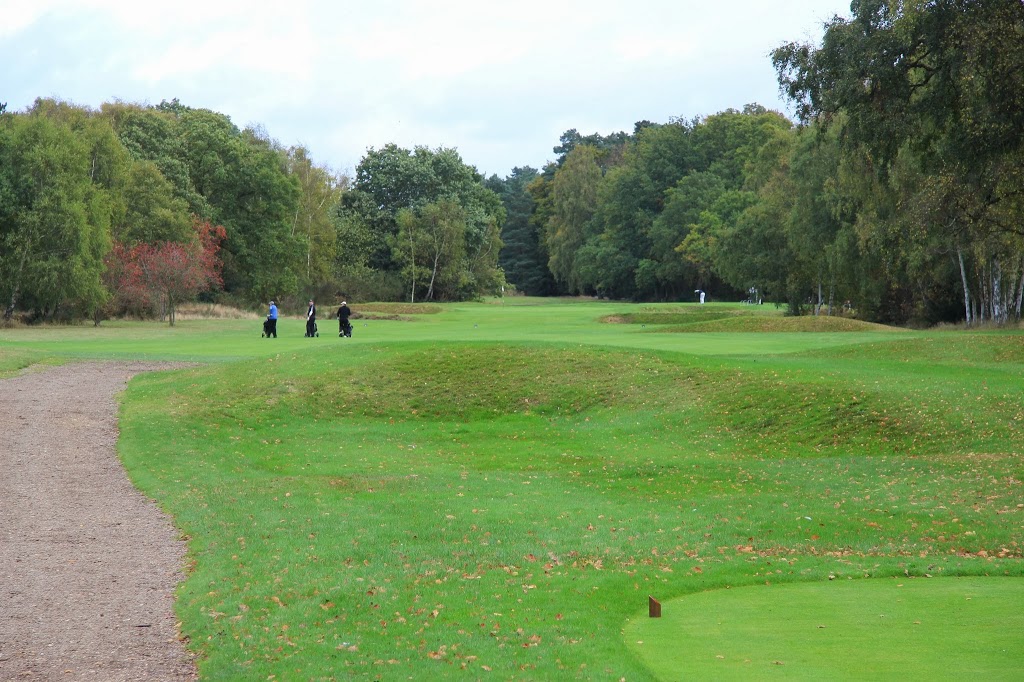 The course opens with a straightforward par 4. The bunkers on the right, and short left of the green, are a small warning of the massive hazards that are yet to come. 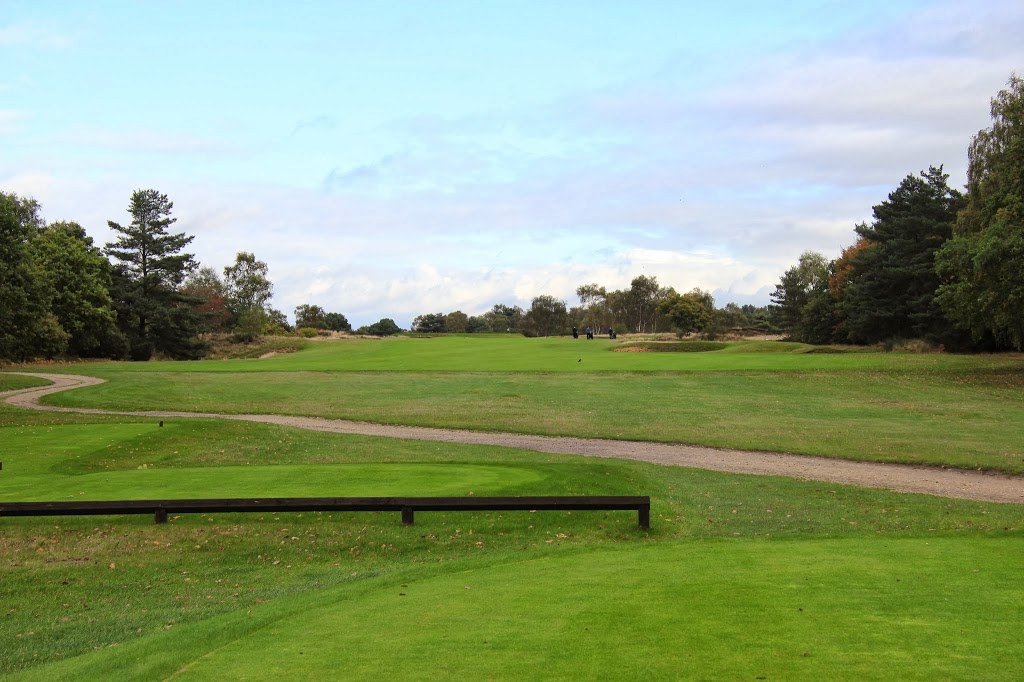 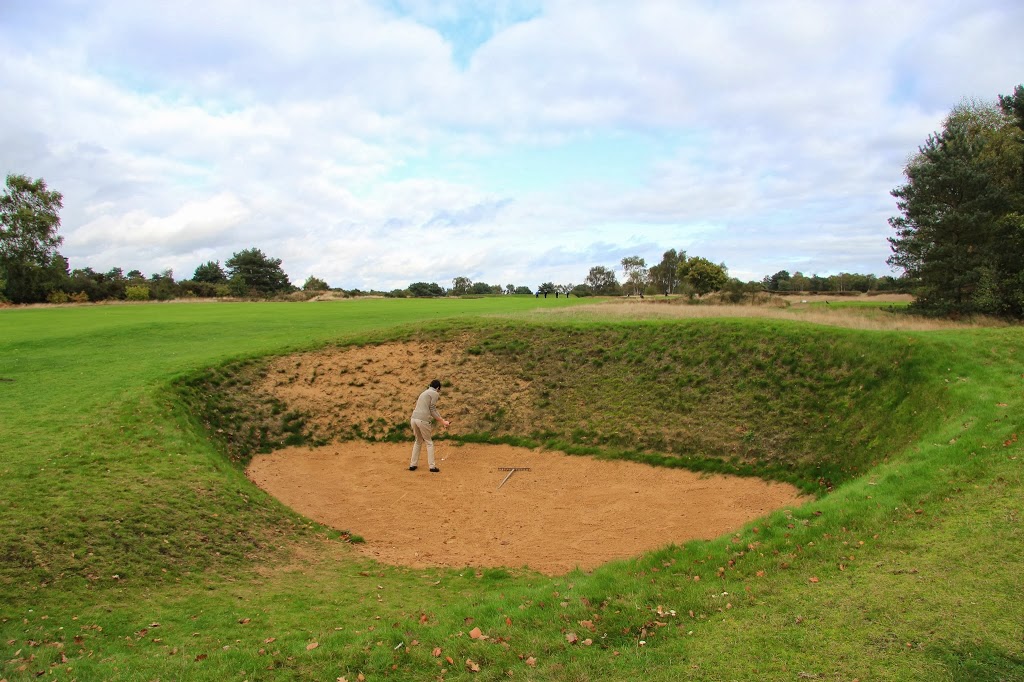 The second hole is a great example of hazards consciously and subconsciously affecting golfers. The fairway is large, and if you play out left, there are no hazards. However, massive bunkers guard the right side of the fairway. To give a sense of scale, the second picture above shows Tim playing out sideways after a wayward drive. Keep in mind that this a fairway bunker. 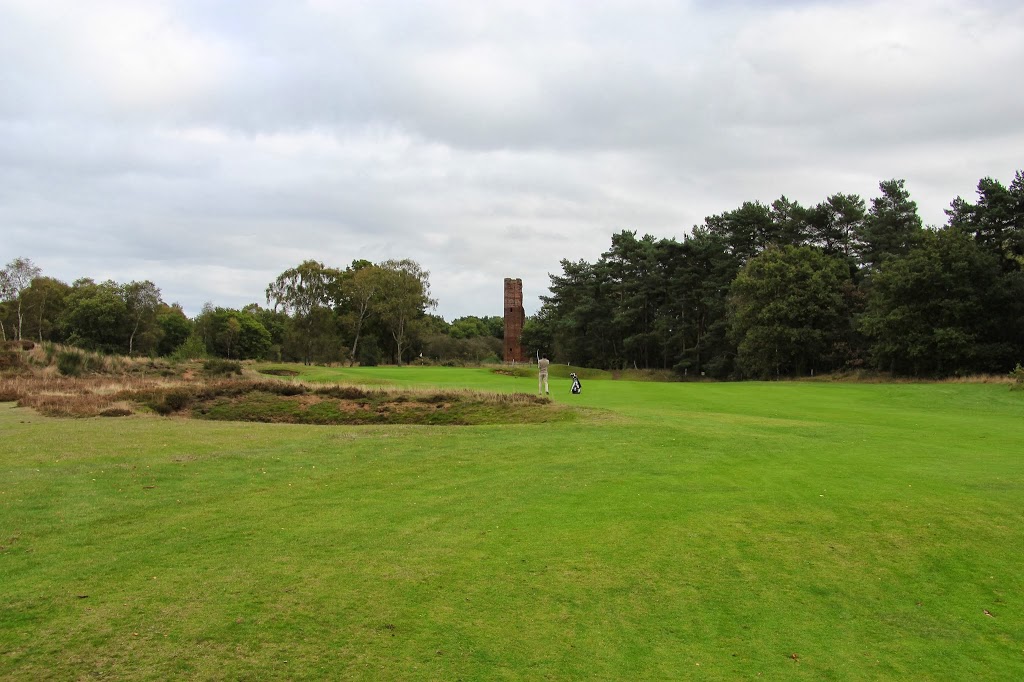 The third hole has a semi-blind tee shot leaving a long approach to the green. Slopes short of the green keep balls from running up, and large bunkers left trap golf balls. The piece of tower behind the green is part of an original structure that dates back to 1440. This is where the course really begins to take off. 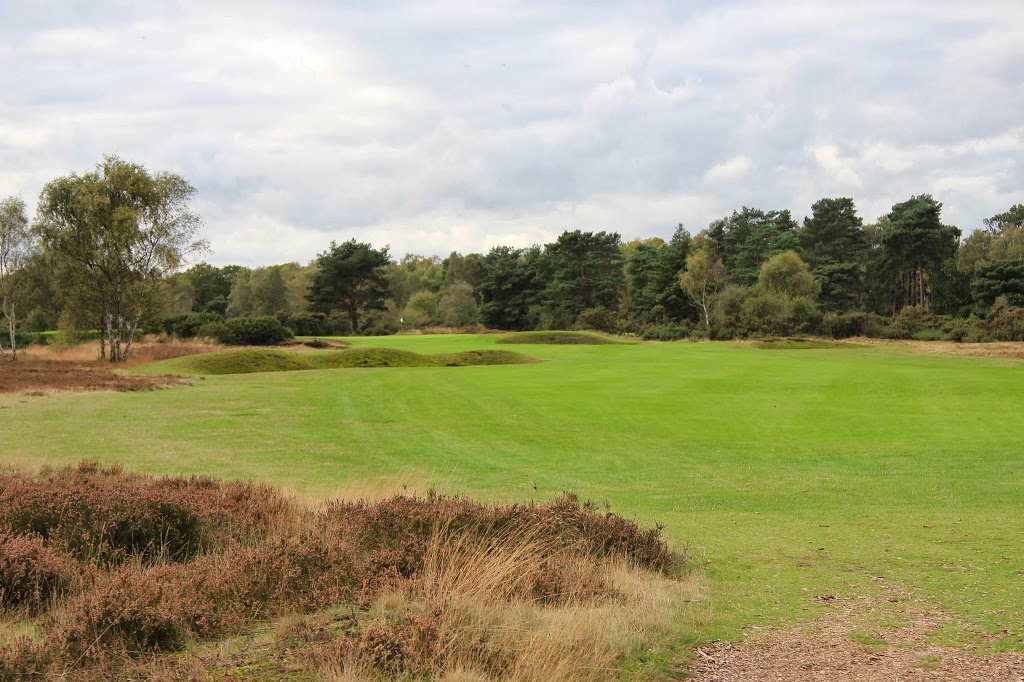 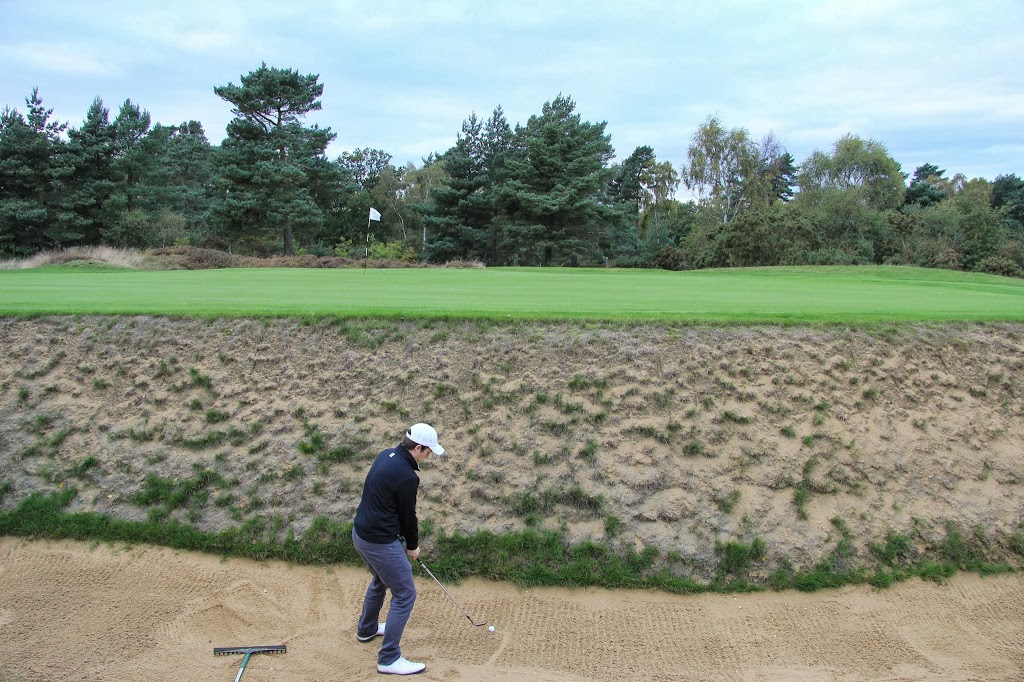 The fourth hole requires a drive to the right side of the fairway, which leaves a short iron approach to a heavily guarded green. I cannot overstate how large and deep the greenside bunkers are on this hole. The photos above do not do the size justice. 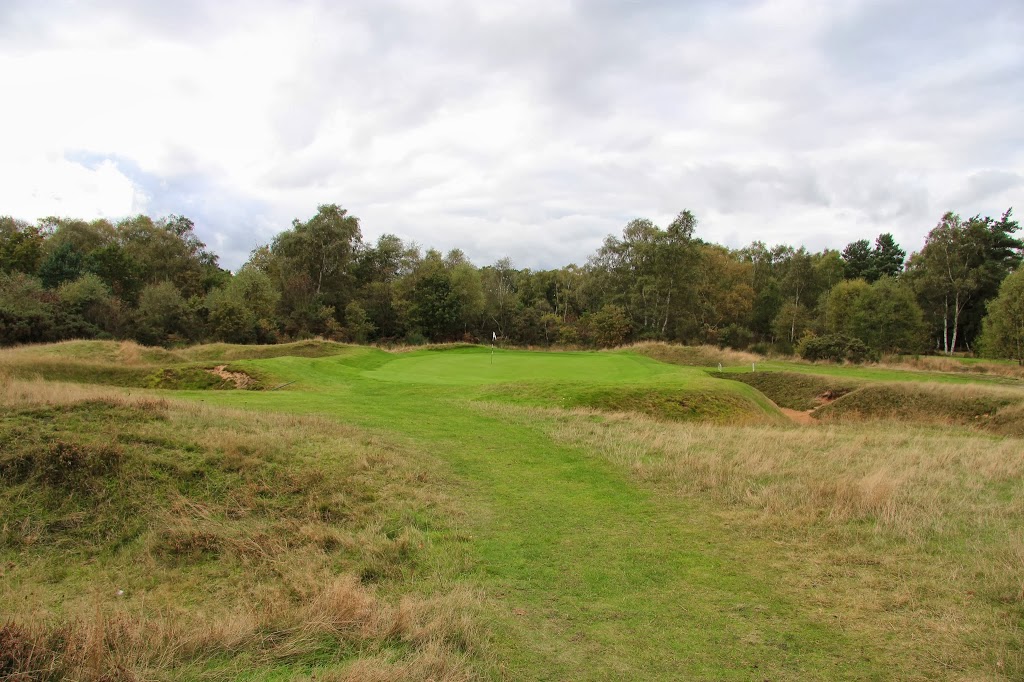 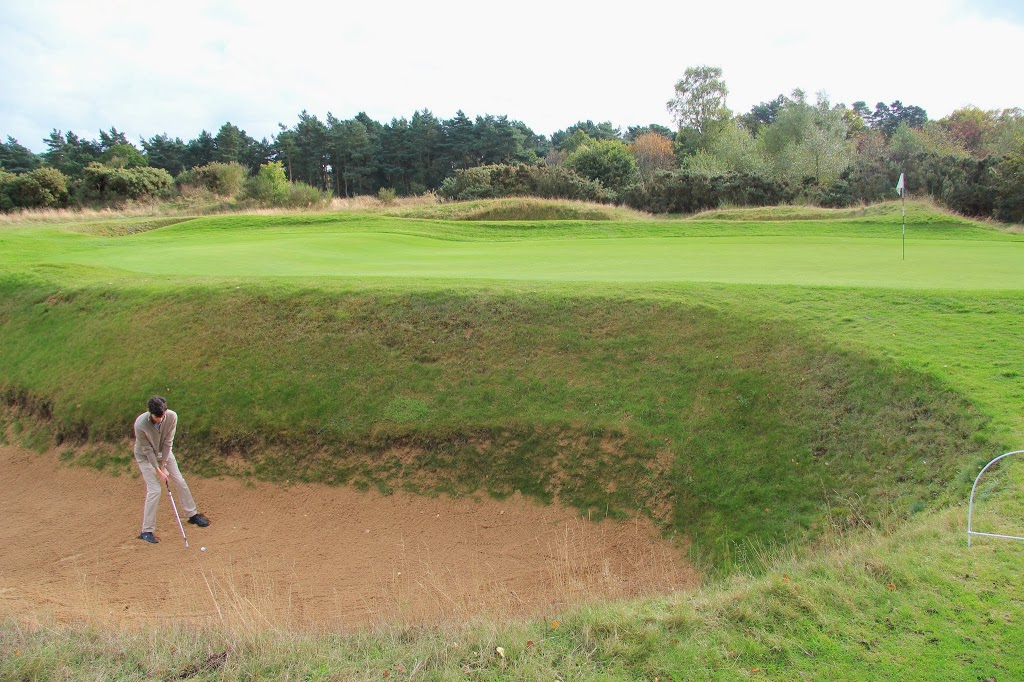 This short par 3 may be my favorite hole on the course. From the tee, golfers have no idea that there are bunkers guarding the very small green. Once you crest a hill, it is apparent that the entire green is surrounded by the same penal bunkers found everywhere on the course. This hole is a great example of a challenging short par 3. 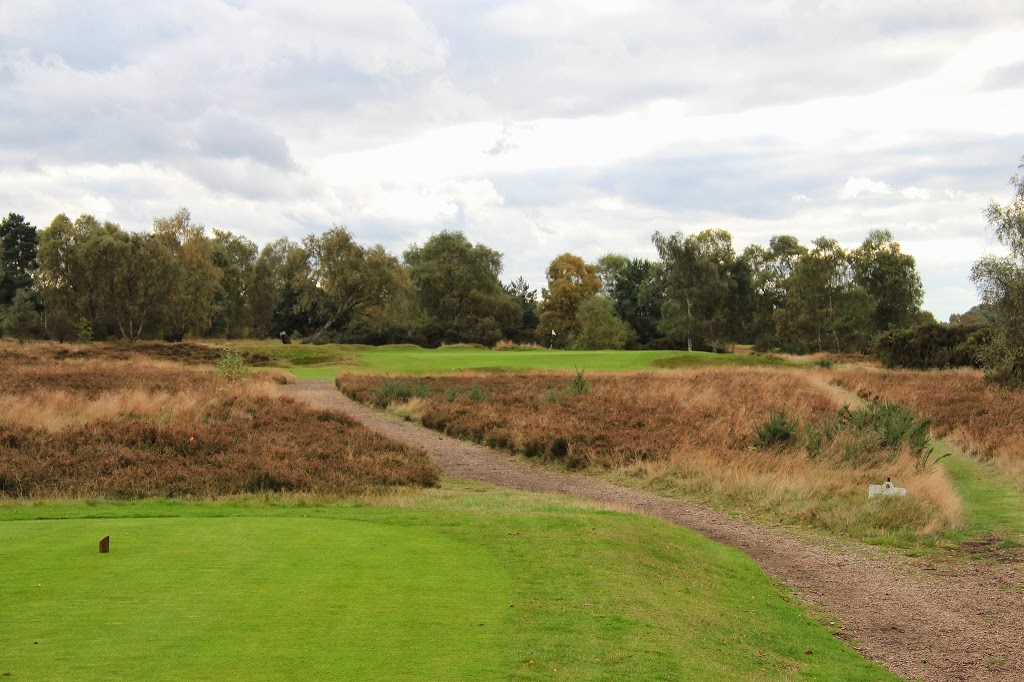 The eighth is another strong par 3 at Woodhall Spa (notice a recurring theme). The hole was playing into a steady wind, and I hit a full 210 yard shot to reach the center of the green. Bunkers guard this green as well, but the putting surface is large, and allows varying degrees of offline shots to survive, a trait of any great long par 3. 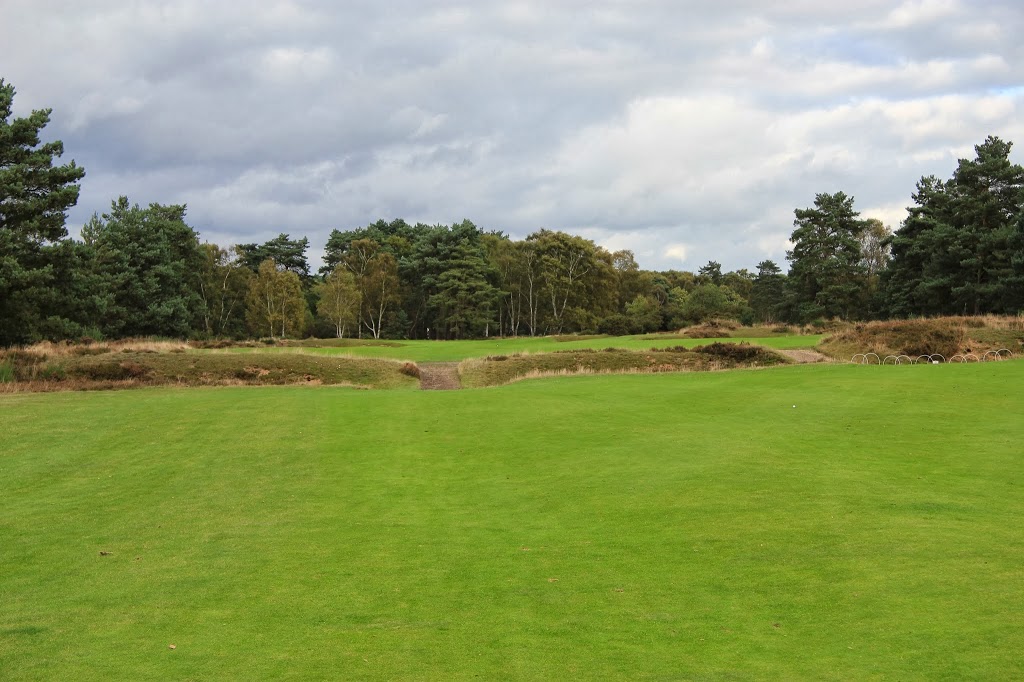 I have a bone of contention to pick with the 9th hole. A set of cross bunkers intersect the fairway of this par 5 directly where a long hitter’s ball should end. I personally have never liked par 5s where a design feature takes driver out of play off the tee. That is certainly the case here. Find a more creative way to make the hole a “three shotter!” 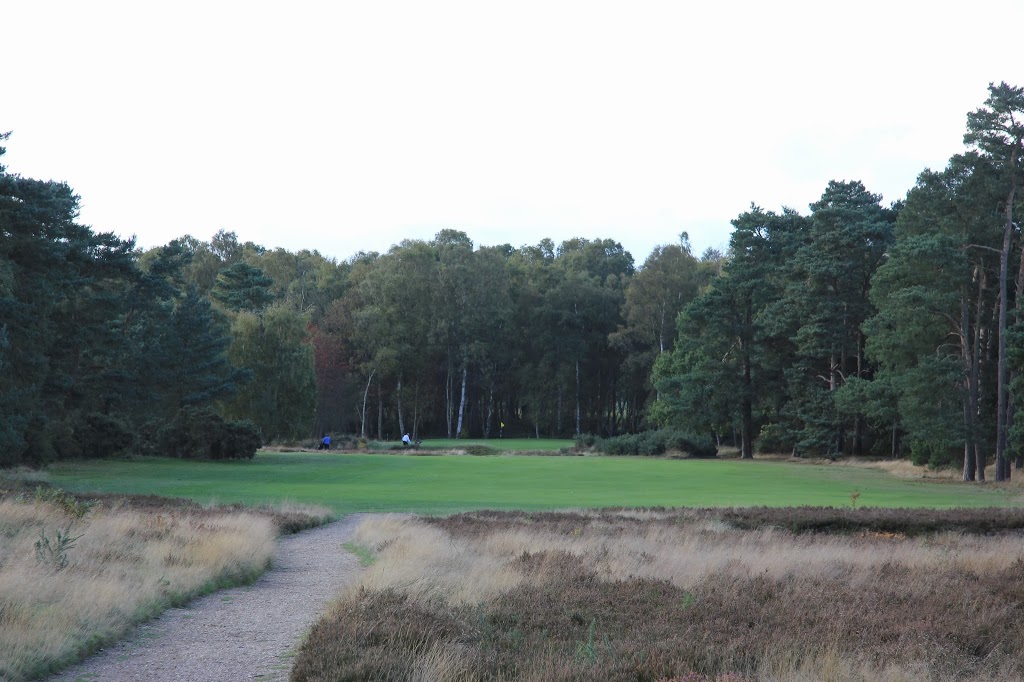 The eleventh started a string of holes featuring tight, tree-lined fairways and heather guarding the greens. The par 4s on the back were all very picturesque, and the course as a whole felt tighter off the tee. 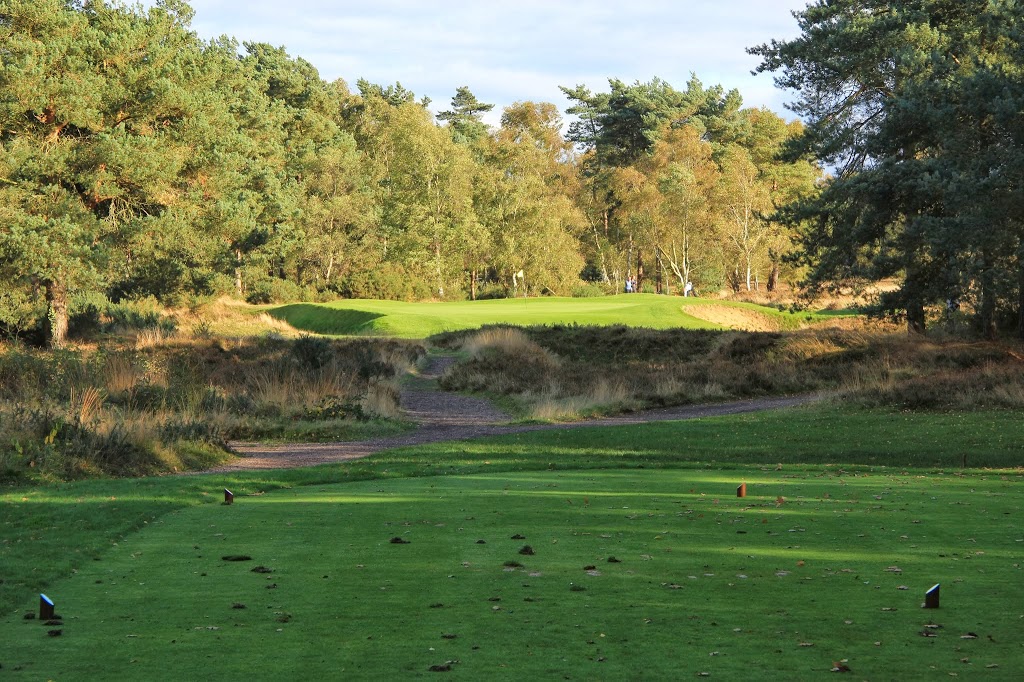 The final par 3 on the course rounded off three very strong short holes. The elevated green at the twelfth demands an accurate mid-iron to get near the pin. Bunkers guarding short left and right swallow any weak tee shots. 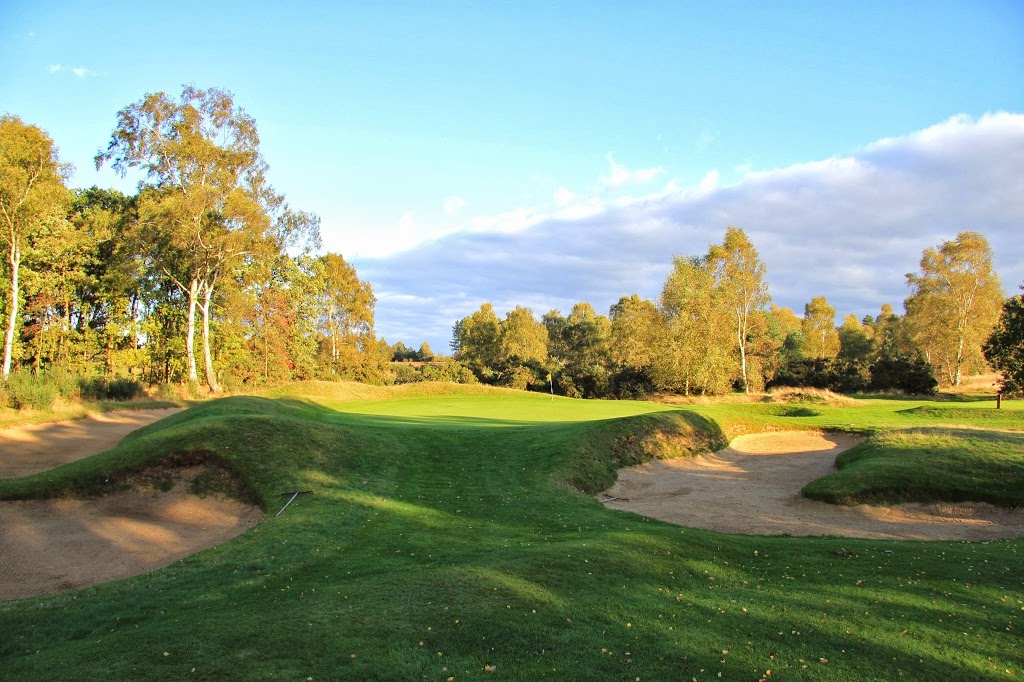 The fifteenth hole was my playing partner Tim’s favorite hole on the course. It is a great example of a difficult, short par 4. The small, undulating green is guarded by deep greenside bunkers. The angle of attack from the fairway makes the already small green even shallower. 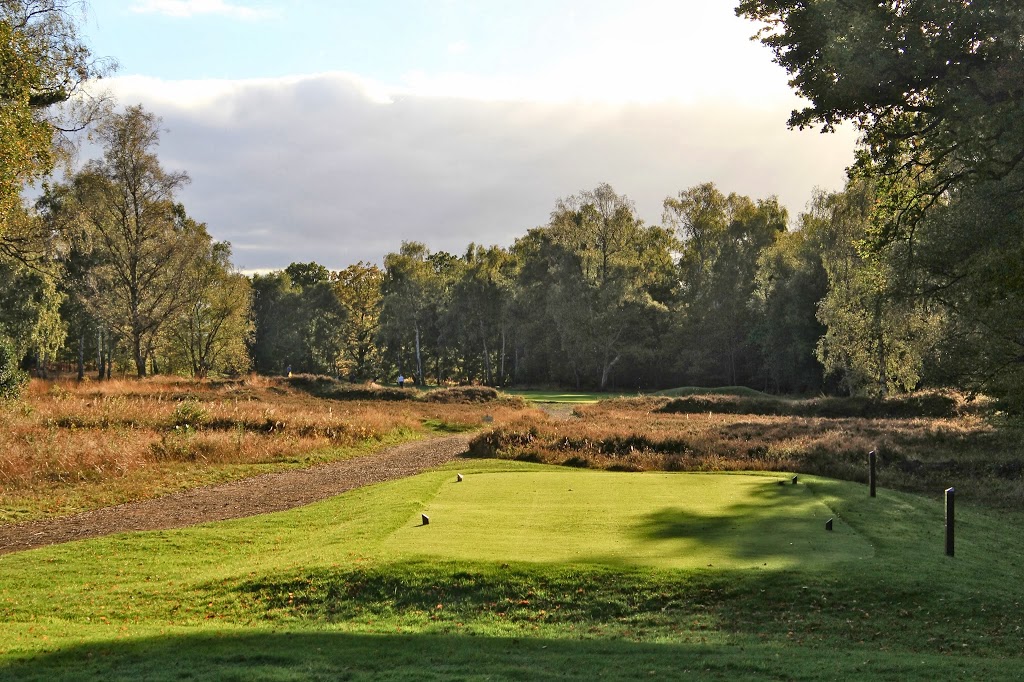 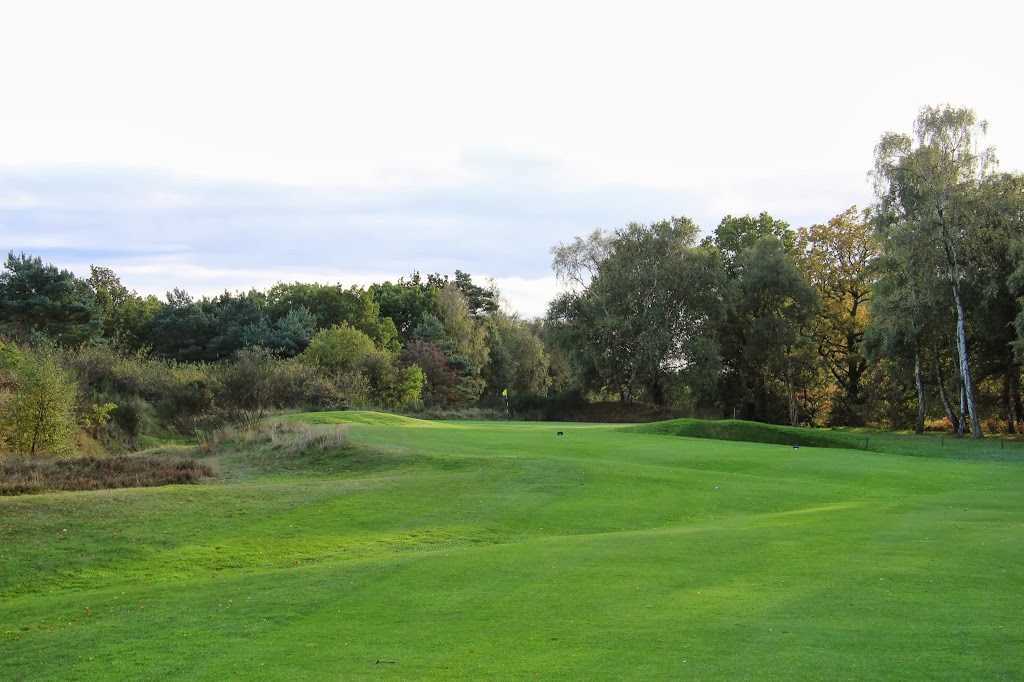 The seventeenth is another one of the tight, tree-lined par 4s on the back nine. The dogleg left bend to the hole is very pleasing to the eye, and bunkers on the right side of the fairway guard any bailout tee shots. 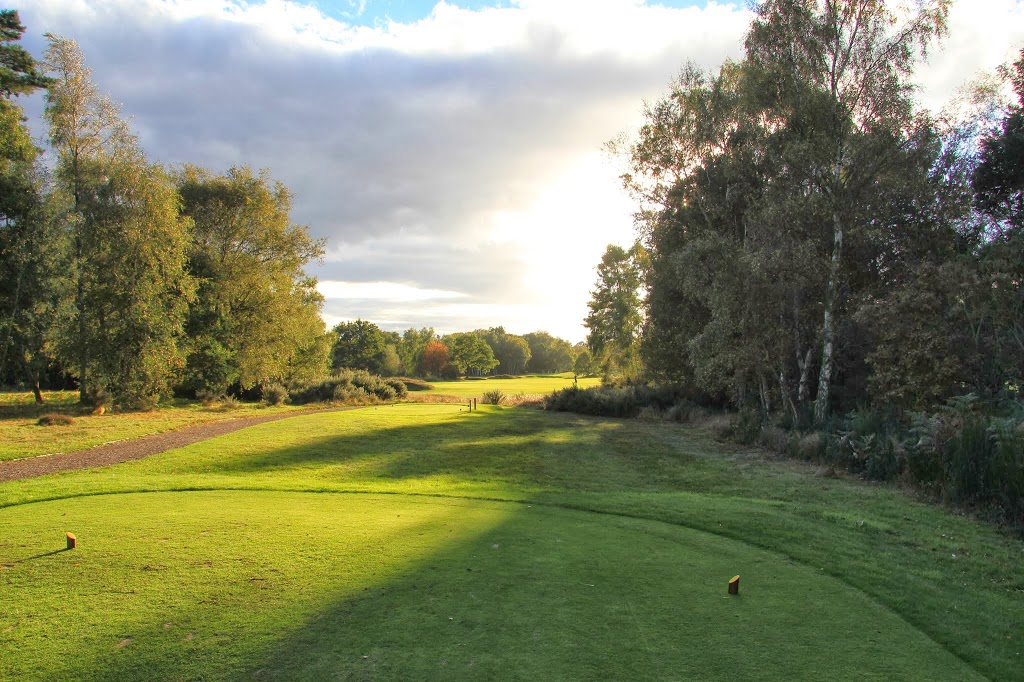 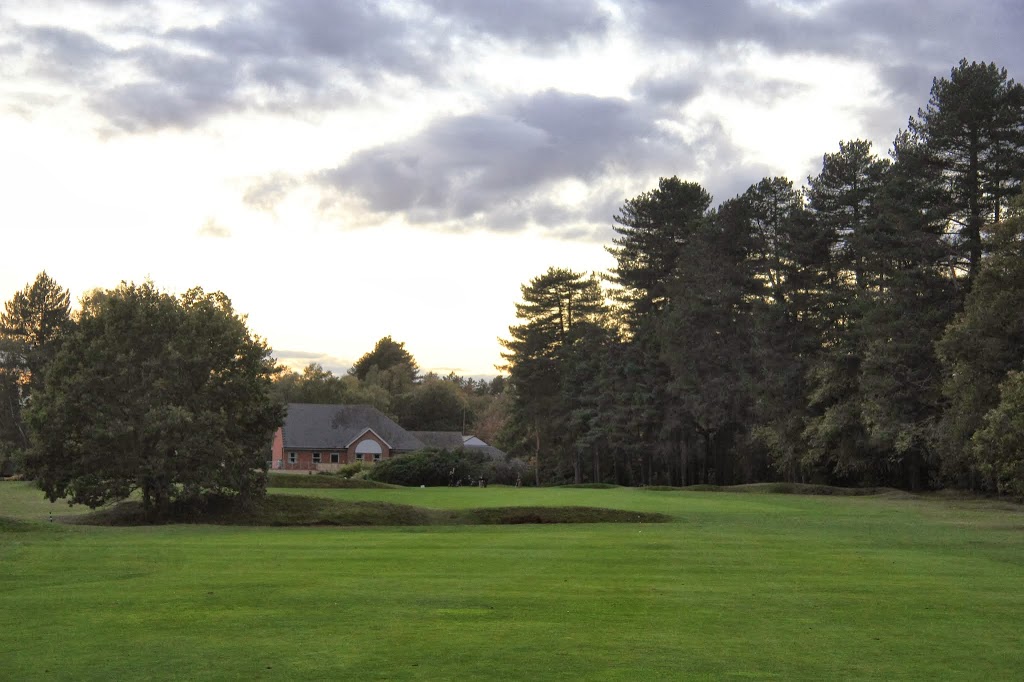 The eighteenth hole requires a left to right ball flight off the tee, opposite of the seventeenth hole. After a solid tee shot, around 165 yards is left to the green. The best miss is certainly short on this green. It is an excellent finishing hole to a very strong round of golf. 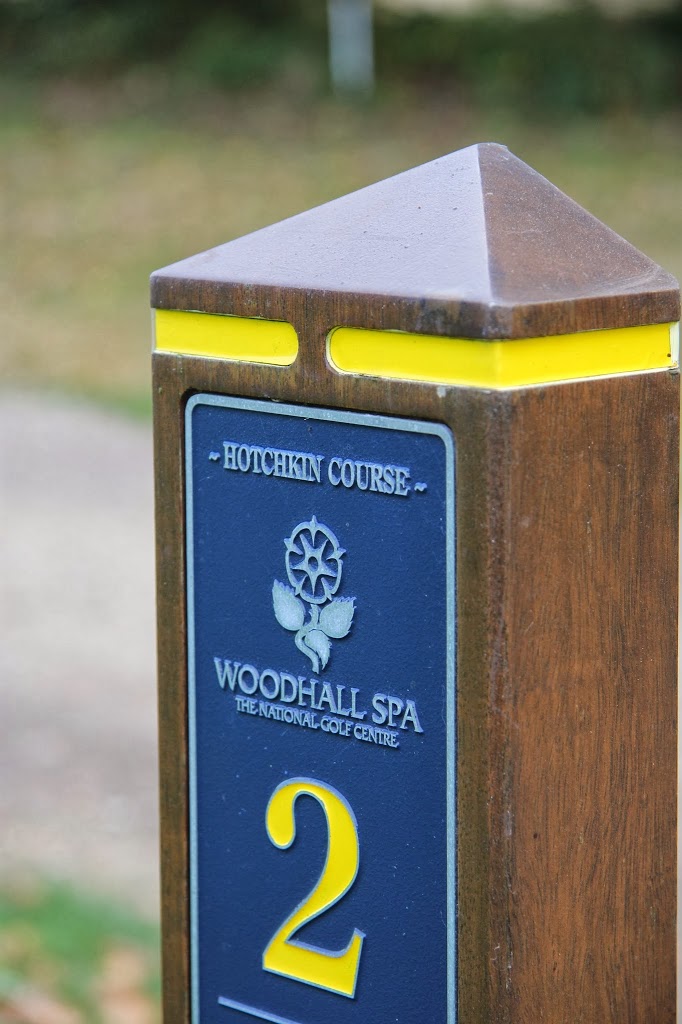 After our round concluded, we immediately turned around and played another 9 holes to cap off a very enjoyable day. Before the round, I had heard many comparisons of Loch Lomond and Woodhall Spa asking which was a better inland course. Having played both, I would say in solely comparing the courses, Woodhall Spa edges out Loch Lomond. Factor in the full experience, and Loch Lomond is on a different planet altogether. My first taste of English golf has merely whetted my appetite, and I am eager to get back down south to play more great inland and heathland courses.